Traveling during  the Christmas holiday is something that most families due; either by car, plane, bus or even train. We did a lot of traveling during the holidays while stationed in Germany. One year we flew to Paris during the Christmas holiday. Some might think that would have been the most memorable; sure we enjoyed it but nothing like Garmisch.


When traveling through the mountains in Germany it takes your breath away. It was an endless picture of nature at its best. The closer we got to Garmisch and the German guesthouse it only got better. There were blankets of white as far as the eyes could see.  The kids would even stop arguing and watch the snow fall. We couldn’t believe how big some of those flakes were. When they would hit the window you could see each flakes design.  It was about a four to five hour drive that the kids would do again and again. That should tell you how much we enjoyed those trips.


We do miss it and plan on visiting the same area again. Who knows maybe in many years to come we will travel that way again with our kids and grandkids. 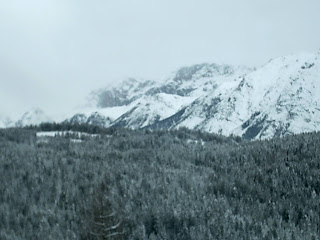