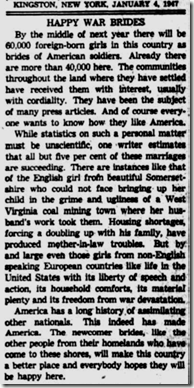 KINGSTON, NEW YORK, JANUARY 4, 1947
HAPPY WAR BRIDES
By the middle of next year there will be
60,000 foreign-born girls in this country as
brides of American soldiers. Already there
are more than 40,000 here. The communities
throughout the land where they have settled
have received them with interest, usually
with cordiality. They have been the subject
of many press articles. And of course every-
one wants to know how they like America.
While statistics on such a personal matter
must be unscientific, one writer estimates
that all but five per cent of these marriages
are succeeding. There are instances like that
of the English girl from beautiful Somerset-
shire who could not face bringing up her
child in the grime and ugliness of a West
Virginia coal mining town where her hus-
band’s work took them. Housing shortages,
forcing a doubling up with his family, have
produced mother-in-law troubles. But by
and large even those girls from non-English
speaking European countries like life in the
United States with its liberty of speech and
action, its household comforts, its material
plenty and its freedom from war devastation.
America has a long history of assimilating
other nationals. This indeed has made
America. The newcomer brides, like the
other people from their homelands who have
come to these shores, will make this country
a better place and everybody hopes they will
be happy here.