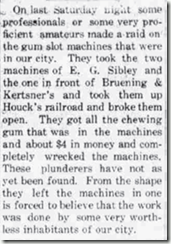 Clipping out of the Jackson Herald, Jackson, MO April 1907

On last Saturday night some
professionals or some very pro-
ficient amateurs made a raid on
the gum slot machines that were
in our city. They took the two
machines of E. G. Sibley and
the one in front of Bruening &
Kertsner’s and took them up
Houck’s railroad and broke them
open. They got all the chewing
gum that was in the machines
and about $4 in money and com-
pletely wrecked the machines.
These plunderers have not as
yet been found. From the shape
they left the machines in one
is forced to believe that the work
was done by some very worth-
less inhabitants of our city. 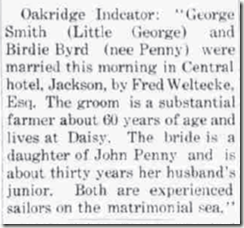 Clipping out of the Jackson Herald, Jackson, MO April 1907

Oakridge Indcator: “George
Smith (Little George) and
Birdie Byrd (nee Penny) were
married this morning in Central
hotel, Jackson, by Fred Weltecke,
Esq. The groom is a substantial
farmer about 60 years of age and
lives at Daisy. The bride is a
daughter of John Penny and is
about thirty years her husband’s
junior. Both are experienced
sailors on the matrimonial sea.”