The Letter and Envelope in Question Revealed

Yesterday I was so happy to finally have a meeting with two wonderful ladies, June Esquilin and Marguerita Page who are both sisters here in Clarksville. You might recognize the name Marguerita Page that’s because she appeared on the first PBS “Genealogy Roadshow” episode that aired this past Monday.  Their family reveal was about their great grandfather’s cousin, Albert Roberts and the “bombshell” letter stating that Governor Austin Peay was his father. As you can only imagine we had a lot to discuss, they shared some insight and information that I wasn’t aware of. That’s only because as researchers for the show we couldn’t discuss the research we were doing, not even with the families. I in turn was able to turn over my research along with the documents and a few photographs.  I feel so lucky to have had the opportunity to meet with both of these funny, caring and interesting ladies. Its moments like that, when I hand over my research and see the smiles, shocked looks and tears that remind me how lucky I am to do this type of work. At times we run into some controversial issues, which of course all of you are aware there was some controversy over one document that was reviled on the show. Yes I’m referring to the letter, there was only a portion of the letter that was reviled and that caused many and I mean many questions. Two of the major questions are 1) who the letter was sent to and who wrote the letter and 2) what else was said in the letter.
So after yesterday’s meeting, both of the sisters and I signed an agreement giving me permission to discuss the results of the research that I conducted for the show and the process in which I collected the information. We have been asked many questions and for that reason they have asked that I address those and share the experience with the public and media. With all of that being said I now want to take this opportunity to answer the two questions that I mentioned earlier. Below you will see scanned copies of both the front and back of the letter along with a copy of the envelope. If you have a hard time reading it, don’t worry I transcribed both for you. I hope this answers at least two of the questions. But don’t think I have forgotten about the remaining questions I will address all of them on blogs to come.  The next question answered will be what led me to this box to begin with. 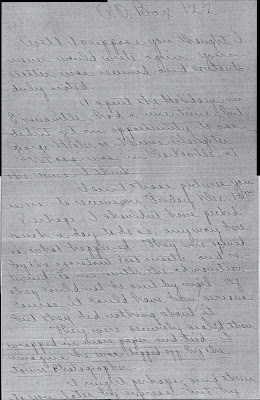 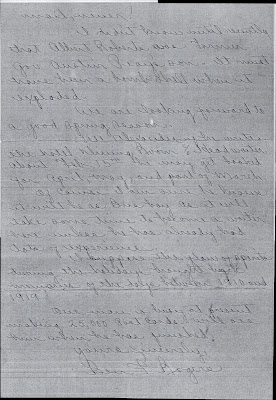 P.O. Box 122
Well I suppose you thought I never would write you again. Your letter was relieved and contents duly noted.
I spent the Holidays in Evansville, had nice time, but didn’t get an opportunity to see George Hester or Hervie Slaughter. Moss was in Clarksville at the time I think.
I sent those pictures you were to receive on Friday Dec. 13th. Perhaps I shouldn’t have picked such a day to do so, anyway here is what happened. They were opened by the assistant Post master and returned to me with the admonition they could not he sent by mail. Of course it could have been serious but they did nothing about it.
They were securely sealed, then wrapped in more paper and tied. I imagine he was tipped off by the town photographer.
I might perhaps send them to you later by express but by mail, never!
I didn’t know until recently that Albert Roberts was former gov. Austin Peay’s son. It must have been a bomb shell when it exploded.
We are looking forward to a good spring season.
Tell Alexander if he writes the hotel Dining Room c/o Head waiter about Feb 15th he may get booked for April, May and part of March.
Of course I am sure he knows it will be as Bus boy as it will take some time to become a waiter unless he has already had lots of experience.
I suppose the flow of spirits during the holidays brought back memories of the days between 1910 and 1919.
Our man is busy at present making25,000 post cards will see him when he has finished.
Yours sincerely,
Ben F. Rogers 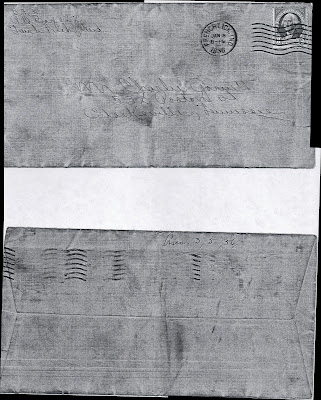