Diana Lewis continued her involvement with extracurricular activities in and outside of school through her years in high school. She was active in raising money as a member of the Candy Canes,  a group of young women who give back to the Visiting Nurses in the community.  She continued to strive as an academic achiever. She was installed in the Order of  the Rainbow Girls, which is part of the Freemasonry. 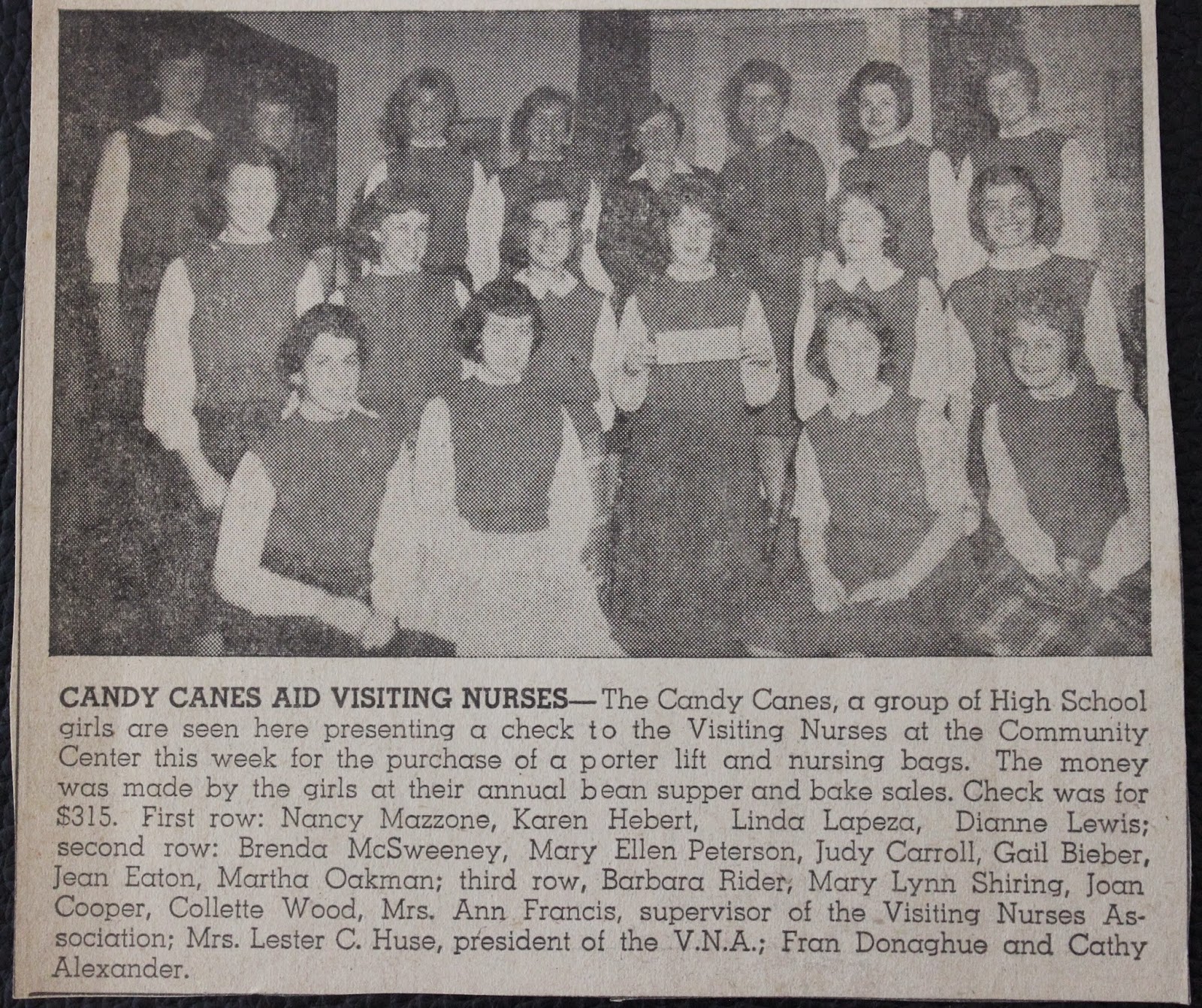 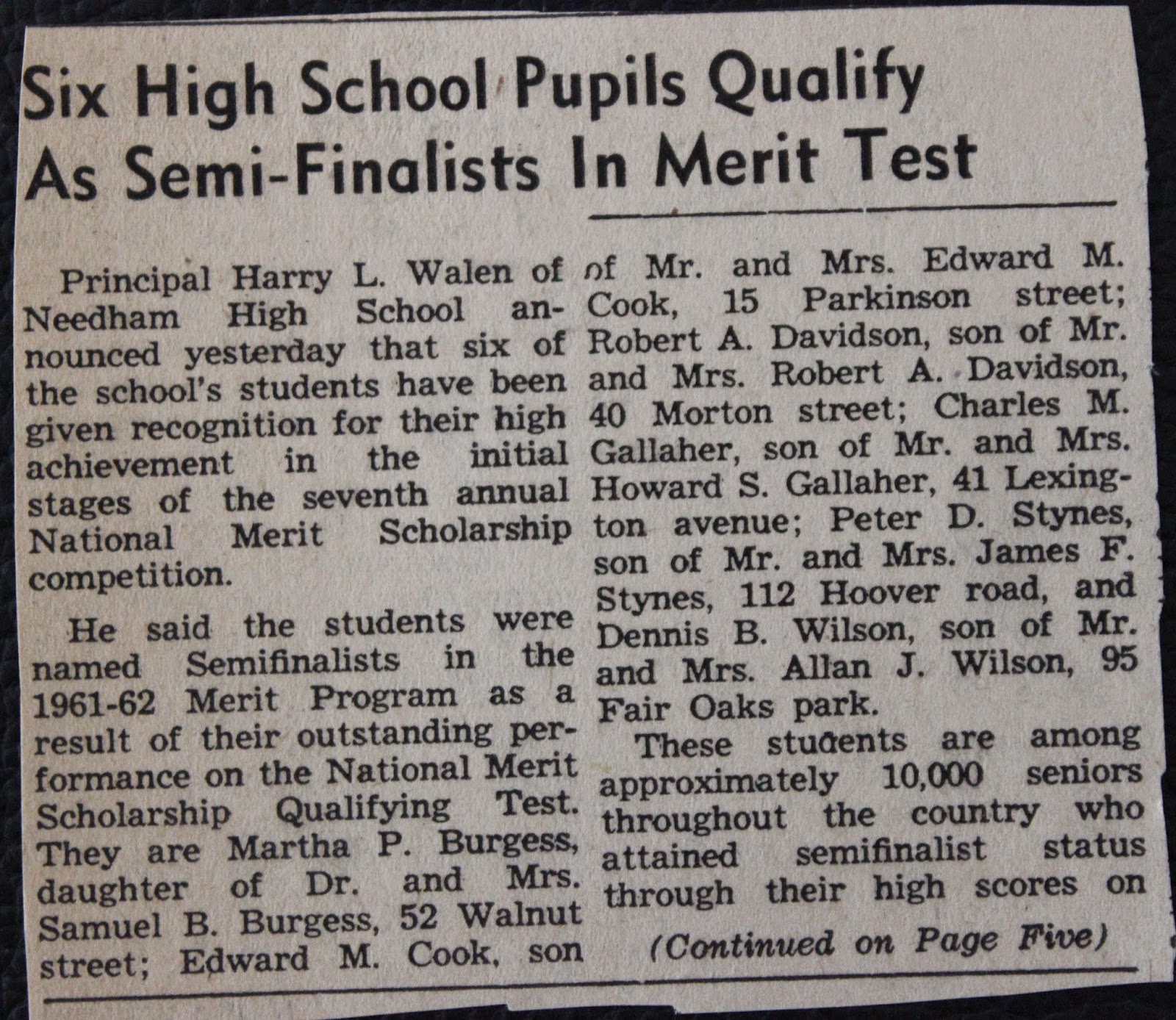 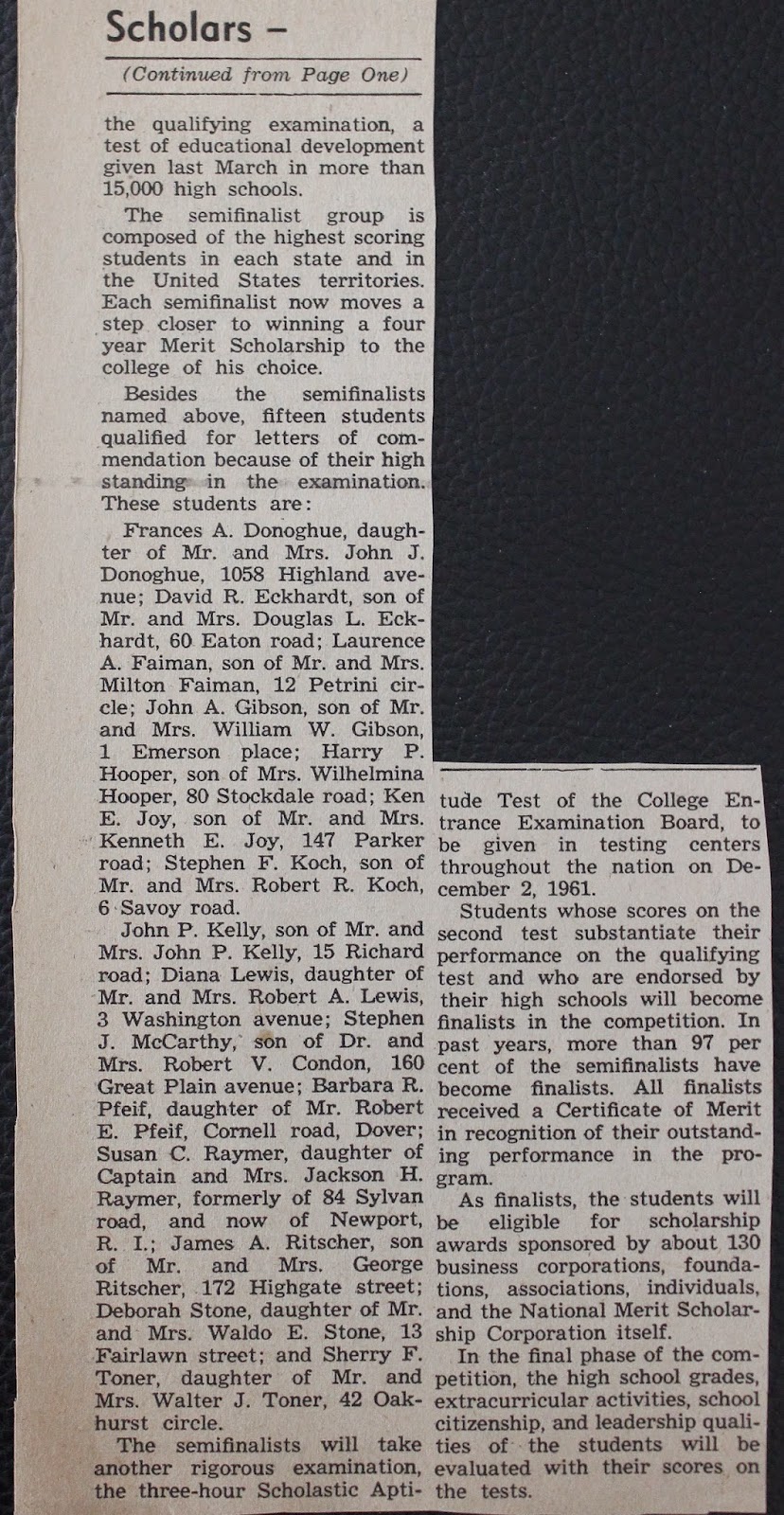 Six High School Pupils Qualify
As Semi-Finalists In Merit Test
Principal Herry L. Walen of
Needham High School an-
nounced yesterday that six of
the school’s students have been
given recognition for their high
achievement in the initial
stages of the seventh annual
National Merit Scholarship
competition.
He said the students were
named Semifinalists in the
1961-62 Merit Program as a
Result of their outstanding per-
formance on the National Merit
Scholarship Qualifying Test.
They are Martha P. Burgess,
daughter of Dr. and Mrs.
Samuel B. Burgess, 52 Walnut
street; Edward M. Cook, son
of Mr. and Mrs. Edward M.
Cook, 15 Parkinson street;
Robert A. Davidson, son of Mr.
and Mrs. Robert A. Davidson,
40 Morton Street; Charles M.
Gallaher, son of Mr. and Mrs.
Howard S. Gallaher, 41 Lexing-
ton avenue; Peter D. Stynes,
son of Mr. and Mrs. James F.
Stynes, 112 Hoover road, and
Dennis B. Wilson, son of Mr.
and Mrs. Allan J. Wilson, 95
Fair Oaks park.
These students are among
approximately 10,000 seniors
throughout the country who
attained semifinalist status
through their high scores on
(continued on Page Five)

The qualifying examination, a
test of educational development
given last March in more than
15,000 high schools.
The semifinalist group is
composed of the highest scoring
students in each state and in
the United States territories.
Each semifinalist now moves a
step closer to winning a four
year Merit Scholarship to the
college of his choice.
Besides the semifinalists
named above, fifteen students
qualified for letters of com-
mediation because of their high
standing in the examination.
These students are:
Frances A. Donoghue, daugh-
ter of Mr. and Mrs. John J.
Donoghue, 1058 Highland ave-
nue; David R. Eckhardt, sone of
Mr. and Mrs. Douglas L. Eck-
hardt, 60 Eaton road; Laurence
A. Faiman, son of Mr. and Mrs.
Milton Falman, 12 Petrini Cir-
cle; John A. Gibson, son of Mr.
and Mrs. William W. Gibson,
1 Emerson place; Harry P.
Hooper, son of Mrs. Wilhelmina
Hooper, 80 Stockdale road; Ken
E. Joy, son of Mr. and Mrs.
Kenneth E. Joy, 147 Parker
road; Stephen F. Koch, son of
Mr. and Mrs. Robert R Koch,
6 Savoy road.
John P. Kelly, son of Mr. and
Mrs. John P. Kelly, 15 Richard
road; Diana Lewis, daughter of
Mr. and Mrs. Robert A. Lewis,
3 Washington avenue; Stephen
J. McCarthy, son of Dr. and
Mrs. Robert V. Condon, 160
Great Plain avenue; Barbara R.
Pfeif, daughter of MR. Robert
E. Pfeif, Cornell road, Dover;
Susan C. Raymer, daughter of
Captian and Mrs. Jackson H.
Raymer, formerly of 84 Sylvan
road, and now of Newport,
R. L.; James A. Ritscher, son
of Mr. and Mrs. Geroge
Ritscher, 172 Highgate street;
Deborah Stone, daughter of Mr.
and Mrs. Waldo E. Stone, 13
Fairlawan street; and Sherry F.
Toner, daughter of Mr. and
Mrs. Walter J. Toner, 42 Oak-
hurst circle.
The seminfinalists will take
another rigorous examination.
The three-hour Scholastic Apti-
tude Test of the Colllege En-
trance Examination Board, to
be given in testing centers
thought out the nation on
December 2, 1961.
Students whose scores on the
second test substantiate their
performance on the qualifying
test and who are endorsed by
their high schools will become
finalists in the completion. In
past years, more than 97 per-
cent of the semifinalists have
received a Certificatee of Merit
in recognition of their outstand-
ing performance in the program.
As finalists, the students will
be eligible for scholarship
awards sponsored by about 130
business corporations, founda-
tions, associatins, individuals
and the Nations Merit Scholar-
Ship Corporation itself.
In the final phase of the com-
petition, the high school grades,
extracurricular activities, school
citizenship, and leadership quali-
ties of the students will be
evaluated with their scores on
the tests. 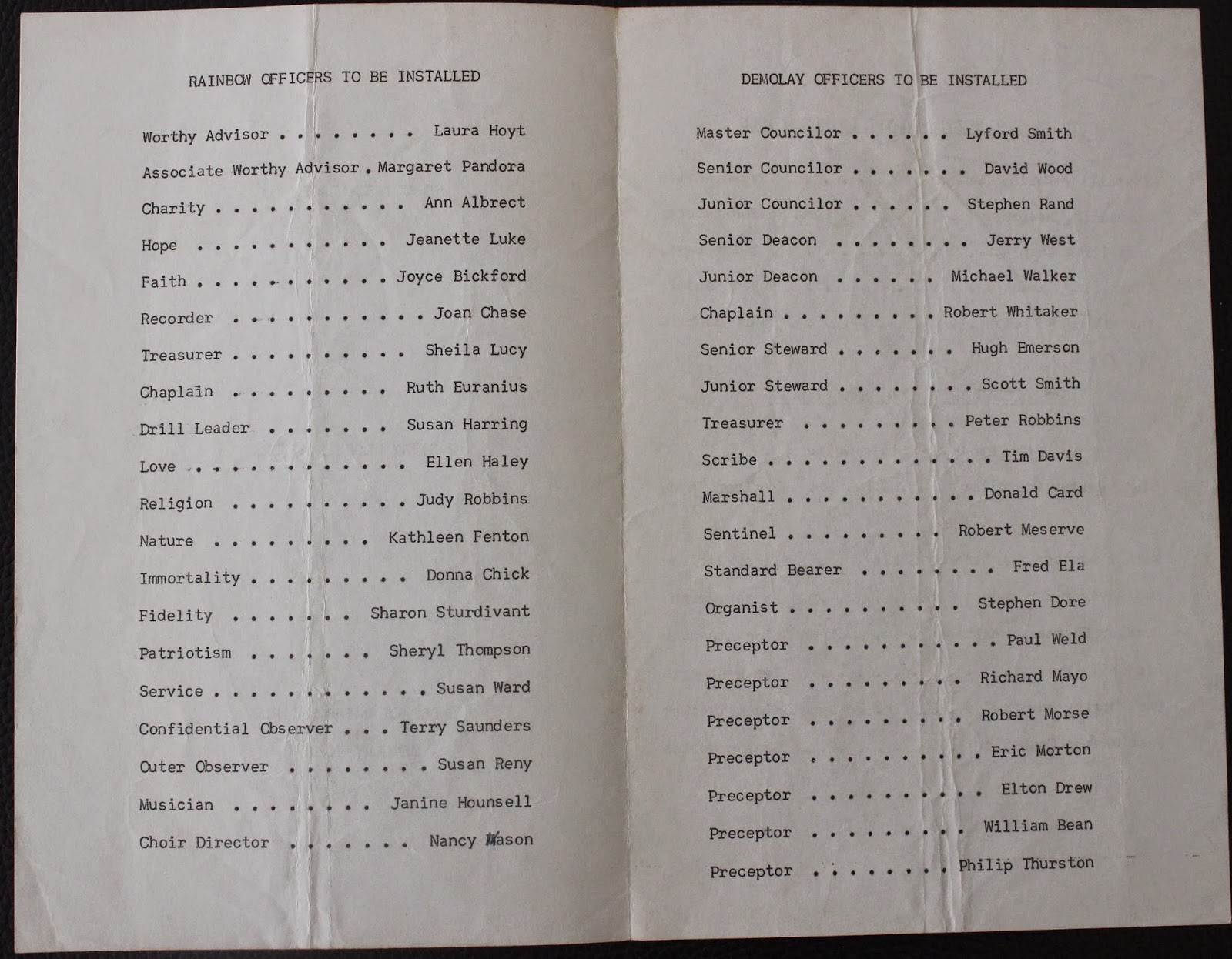 Needham Assembly No. 57
Order of the Rainbow
for Girls 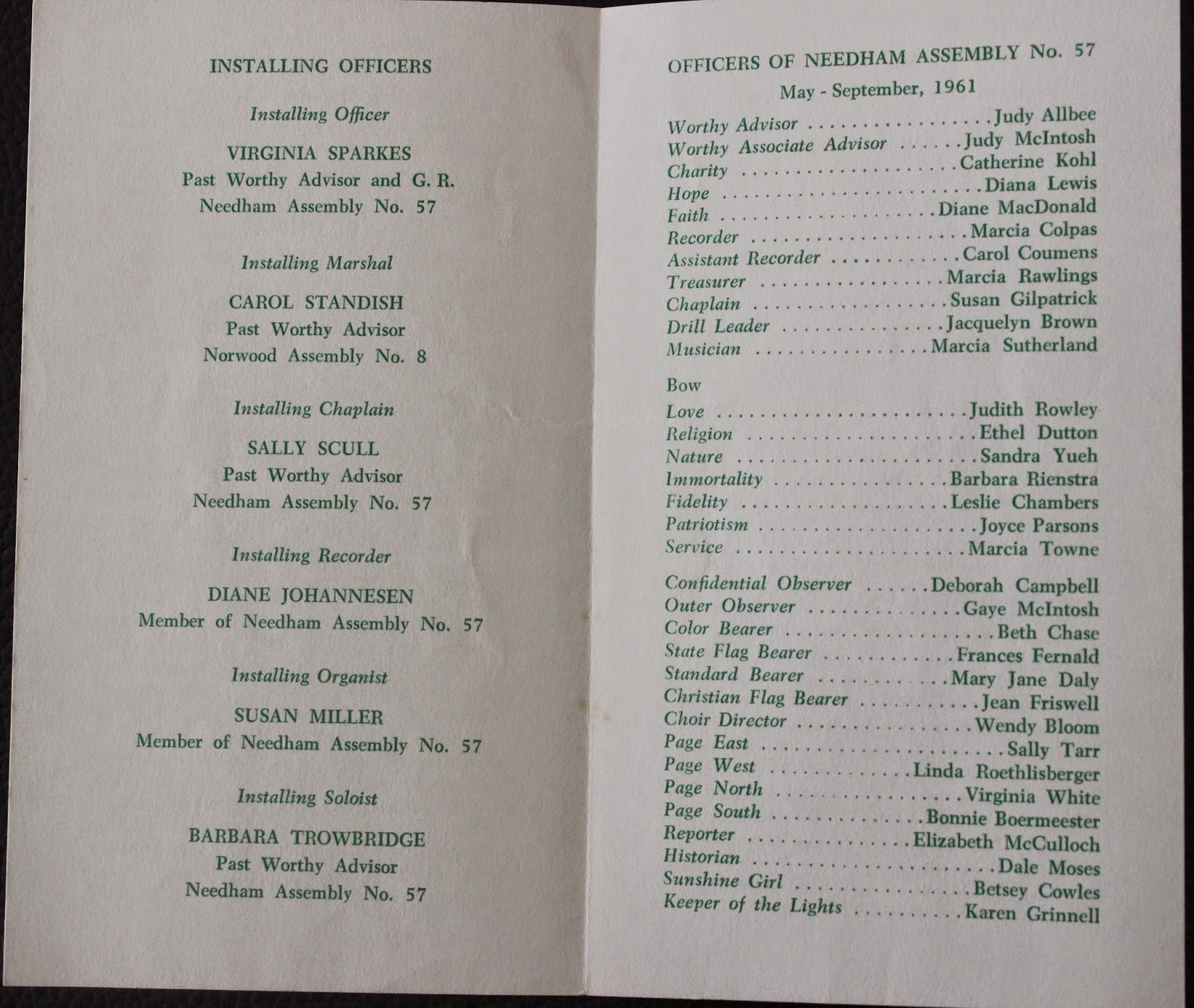 This concludes all of the content that was contained in Diana Lewis's book, that is through her school years. I do however have some additional photographs that I will post tomorrow that were loose  and taken randomly throughout her younger years. Following that post I will then share the last pieces of information that were in the journal, including her wedding announcement, wedding invitation and a Montreal newspaper clipping with about her future husband. Make sure to check back tomorrow and find out some more facts about Diana Lewis.