"My Live Journal"....Diana Lewis and Some of Her School Years

Yesterday I was so happy to share some of the letters from a father to his daughter. In this post you will see a letter from a daughter to her father while she is away at camp. There are many things we try and accomplish through our lives and when it comes to our education we sometimes find ourselves reminiscing those years. Our years spent in elementary, middle and high school help to prepare us for our future and those are some of the best years. Luckily for Diana both her and her mother took time to fill in some of pages. There were a lot of loose papers, photos and newspaper clippings that were included in the purchase of this journal. I’ve included a few of those that that I felt pertained to this time period of Diana Lewis’s life.  I know there are many names listed in this post and as I said before I will at the end of the postings on “My Life Journal” I will post a list of all surnames, and yes they will be in alphabetical order. 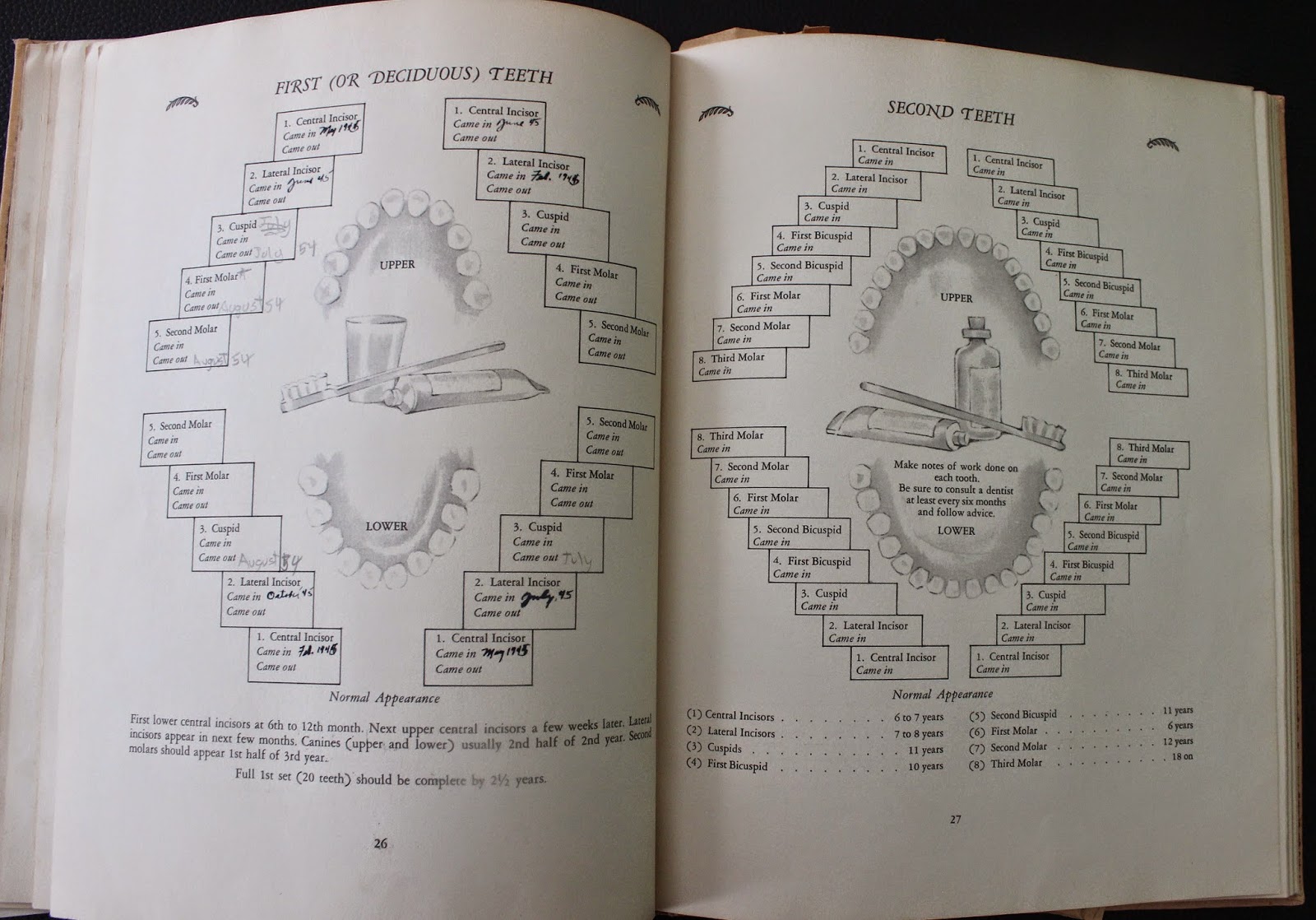 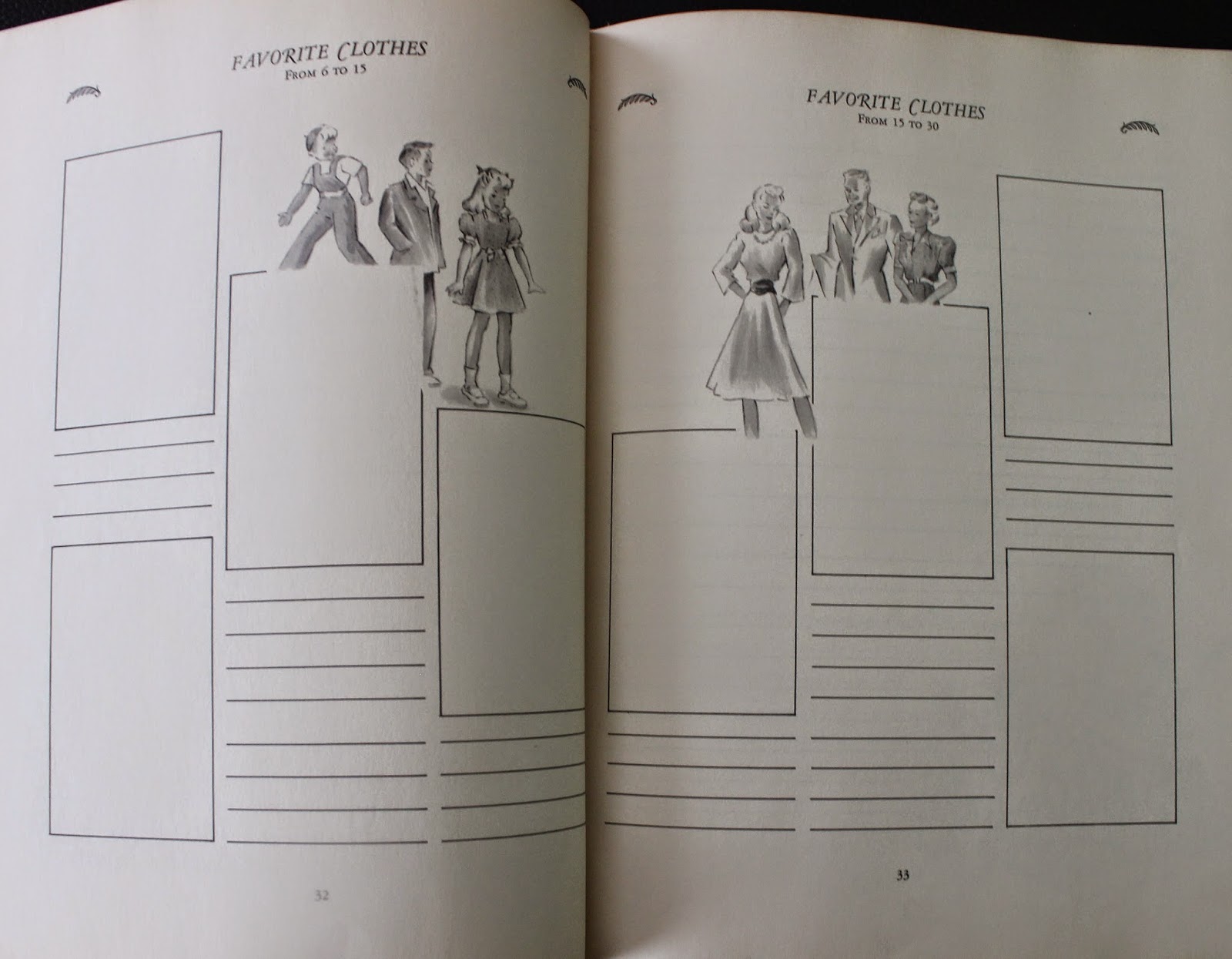 AMBITIONS AND SIGNATURES
AT VARIOUS AGES 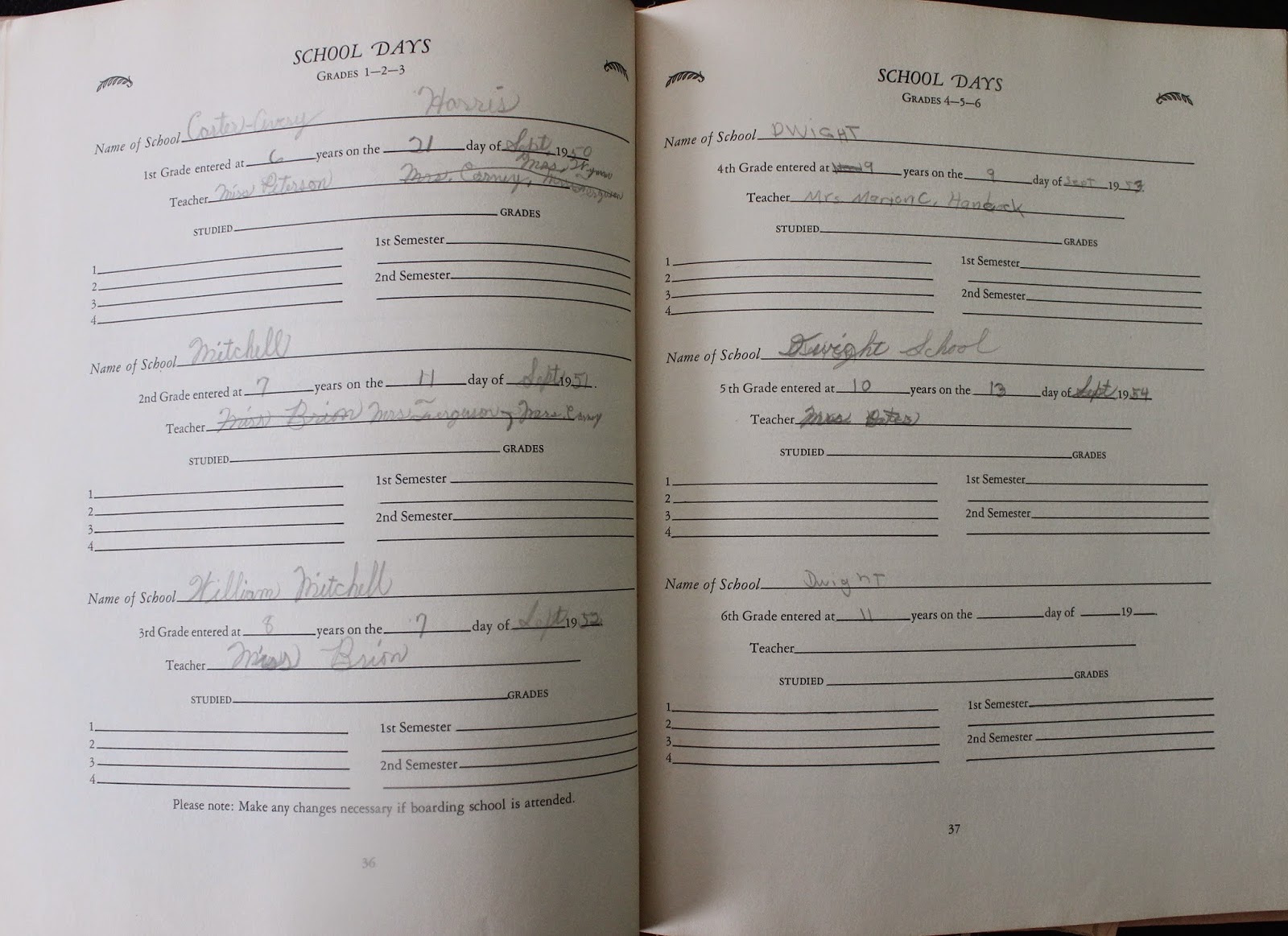 Photographs of pages 36 and 37 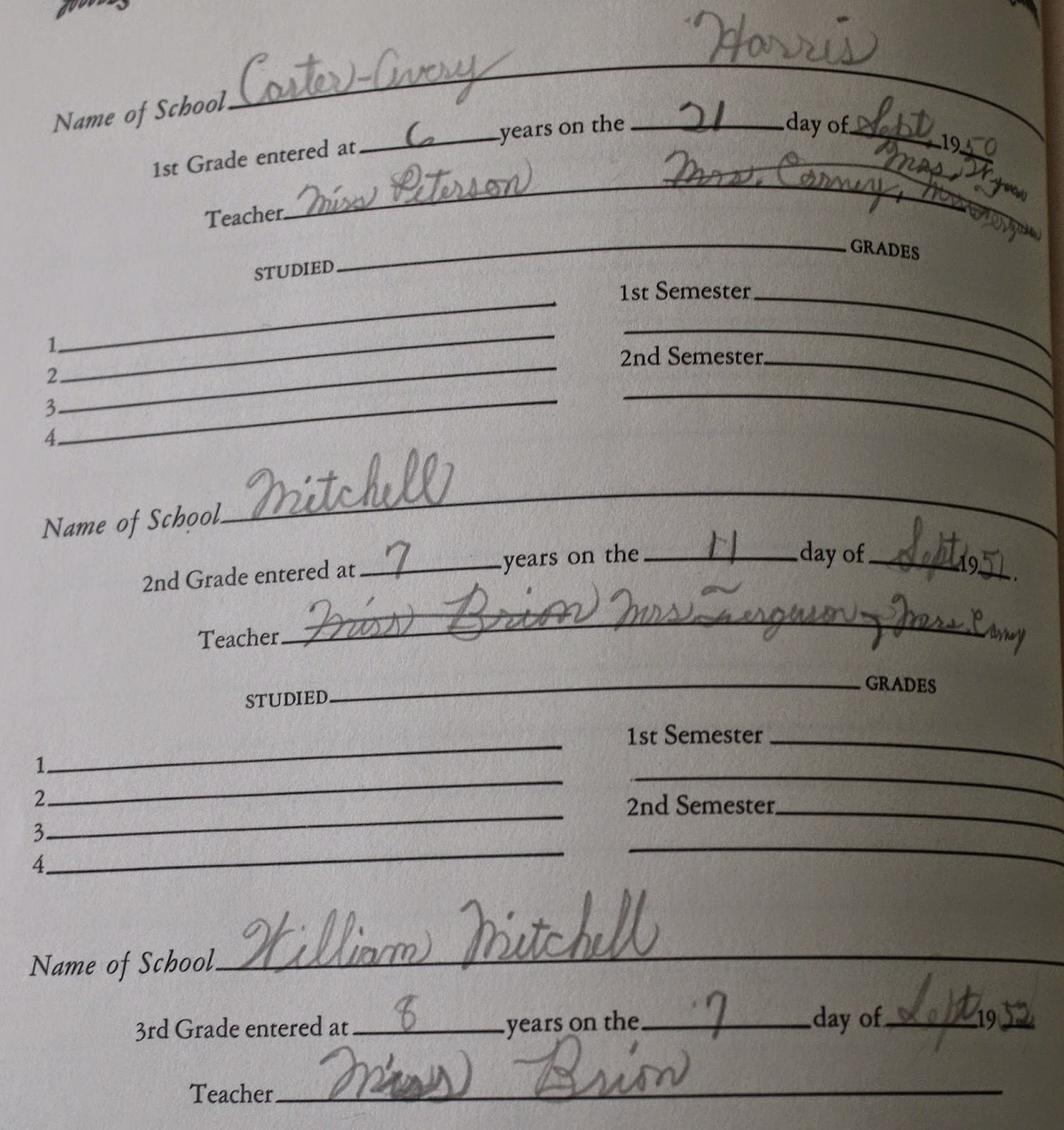 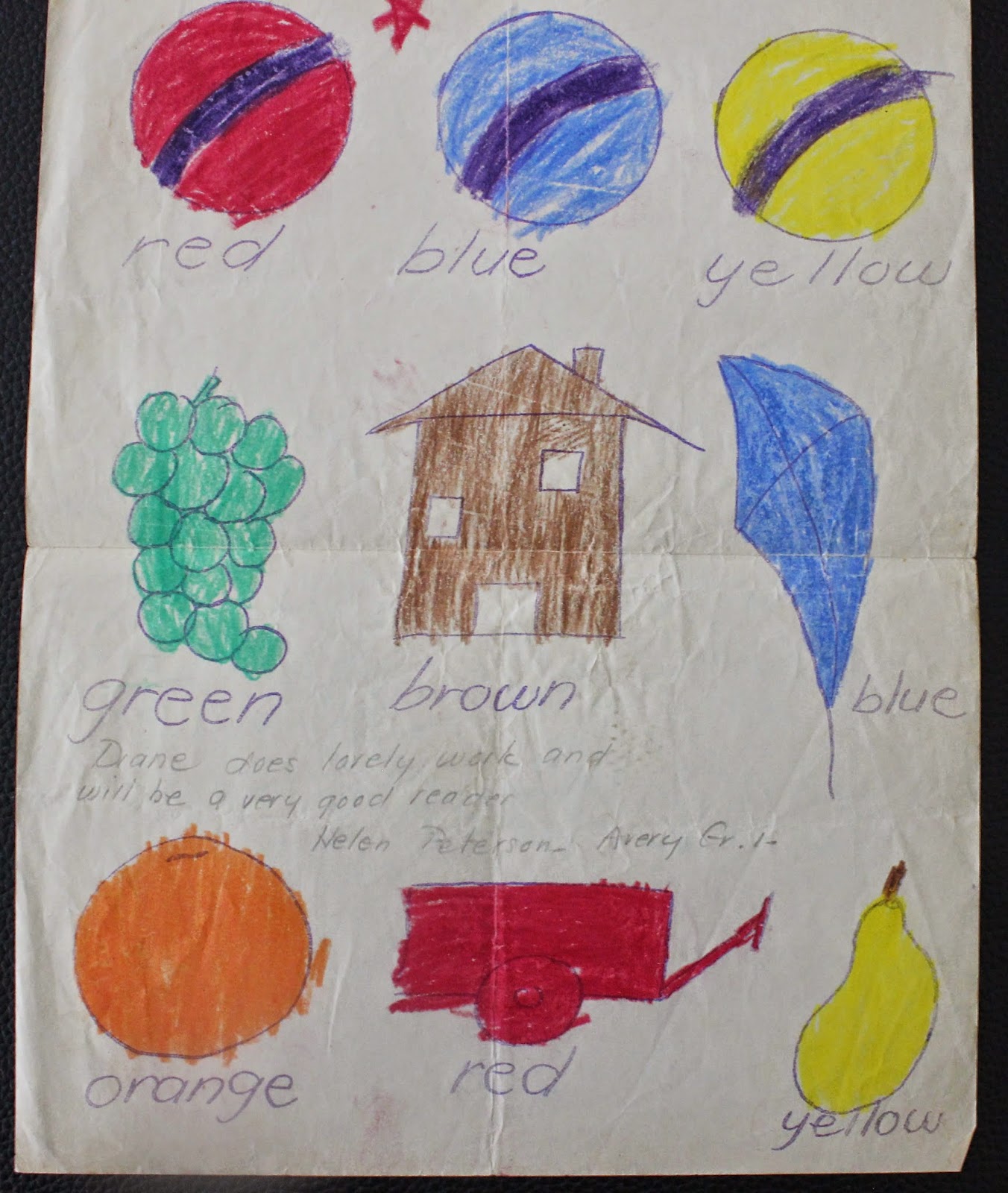 Diane does lovely work and will be a very good reader. Helen Peterson Avery Gr. 1
(Worksheet found loose in the book.)

Mansfield – Claire’s Dance students will present Dance Capades of 1950 under the direction of Mrs. Clare O’Malley at the town hall tomorrow night. 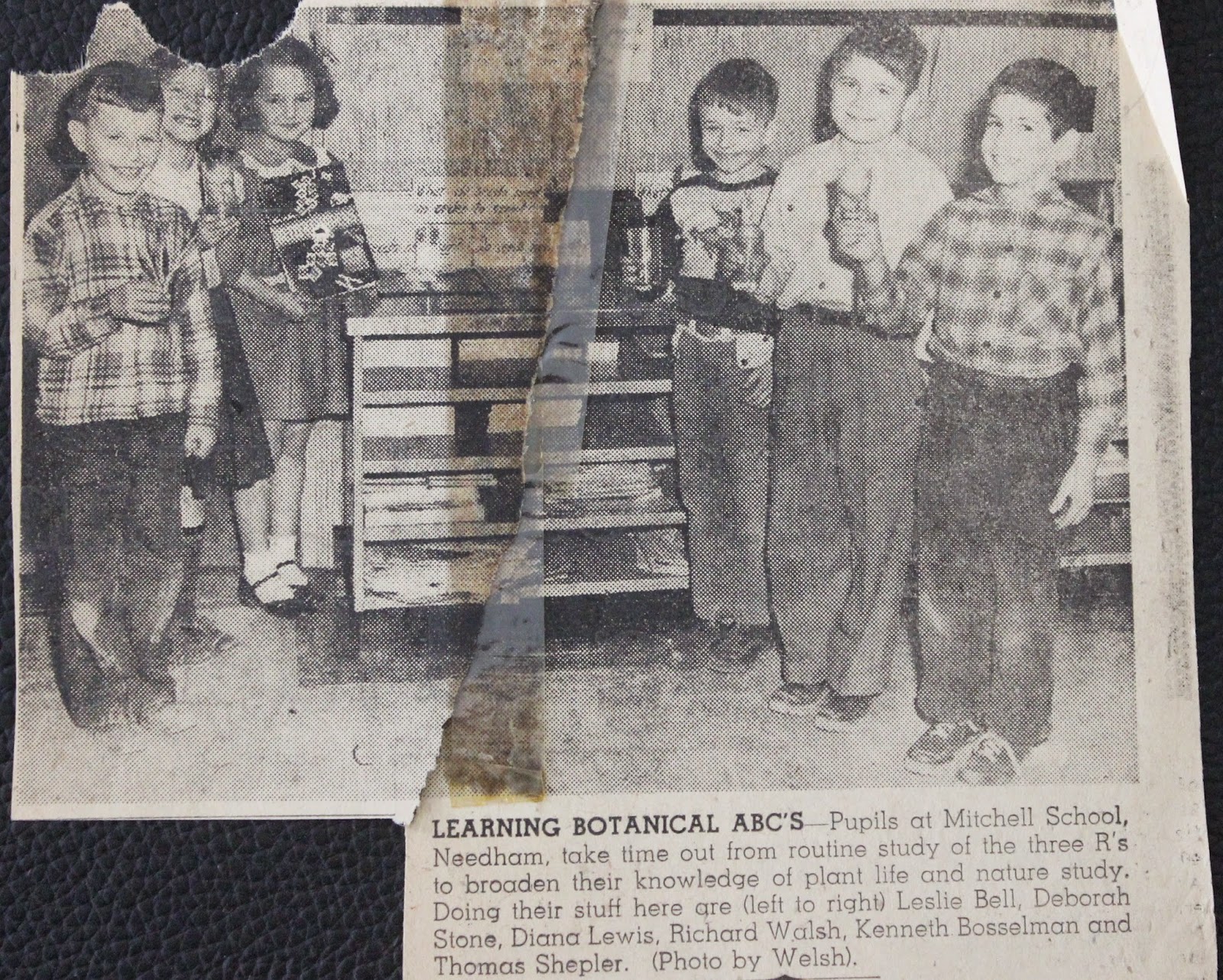 The Men’s Garden Club of Needham is now operating with
first-hand knowledge of nature study in Needham schools, thanks
to an interesting discussion on the subject at their recent meeting
by Leonard J. Savignano, Supervisor of Needham Elementary
Schools. The meeting was held at the home of Robert G. Haskell,
1227 Great Plan avenue.

Mr. Savignano explained that beginning with the second grade pupils are given two hours of instruction weekly in science and nature study consisting, necessarily, of very elementary matter at first, but broadened from year to year.
“Our schools are equipped,” said Mr. Savignano, “to show plant growth in all stages and under varying soil and moisture conditions. Gardens on the school grounds are prepared planted and cared for by the pupils.” He explained that particular emphasis is given to instruction in plant collections hobbies.
“Contrary to general thought,” he said, “plant and animal life studies in our schools are not made at the expense of the three R’s – rather they supplement the ordinary elementary school courses. They create in the young mind an appreciation of the beauty and usefulness of the wonders of nature, and a respect for the property of others.”
Mr. Savignano pointed out that another worthwhile result of the nature courses is their tendency to teach youngsters to do things for themselves – a sort of parallel to the group action learned in organized athletics by a smaller number of individuals.
Mr. Haskell, who was host to the members who met at his home, admitted that most of Mr. Savignano’s listeners had to look a long, long way back to remember their elementary school years.
“Most of us, though,” he said, “have children and grandchildren in whom we’re interested, and Mr. Savignano convinced us that they are receiving maximum benefit from our teachers in our school.” 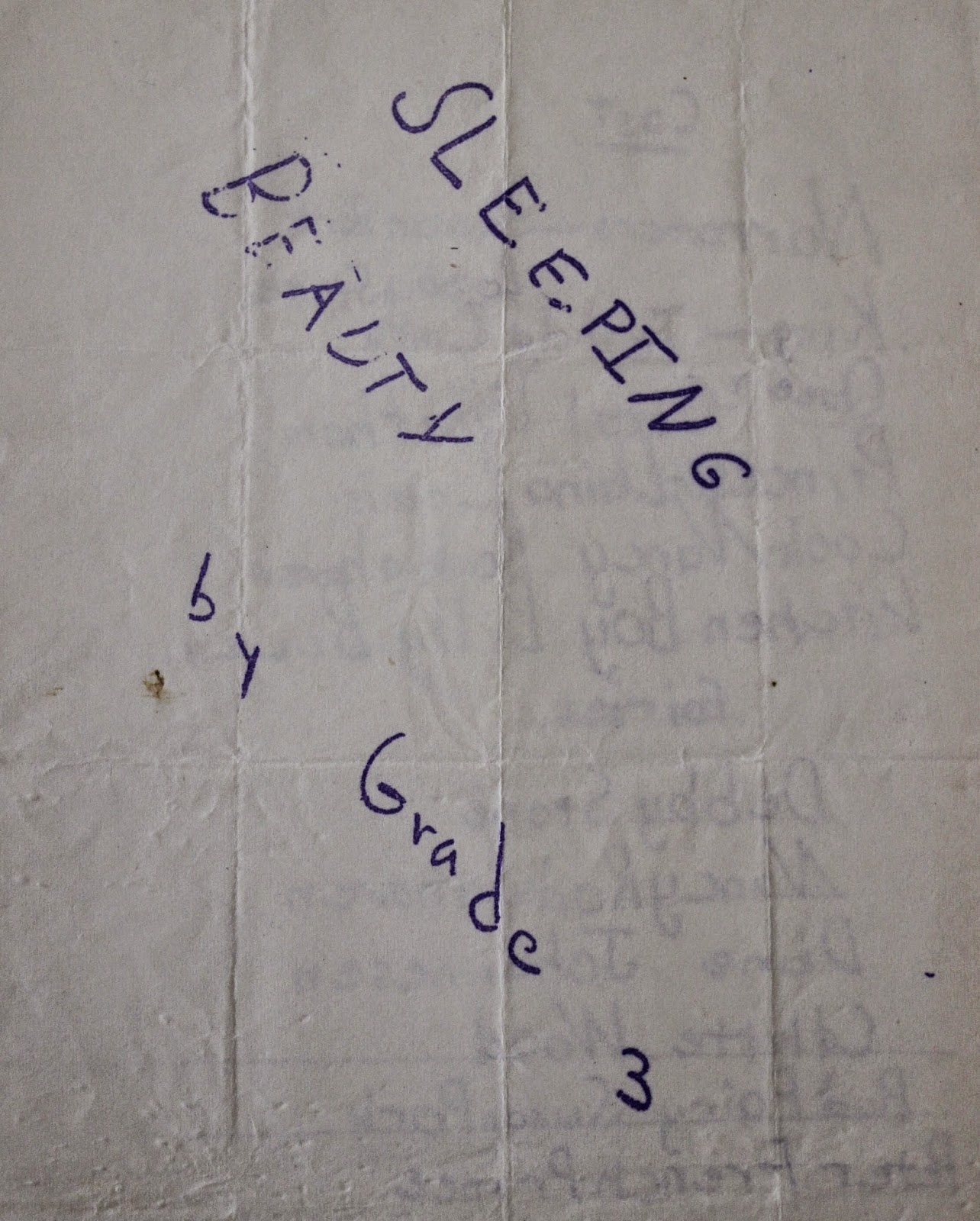 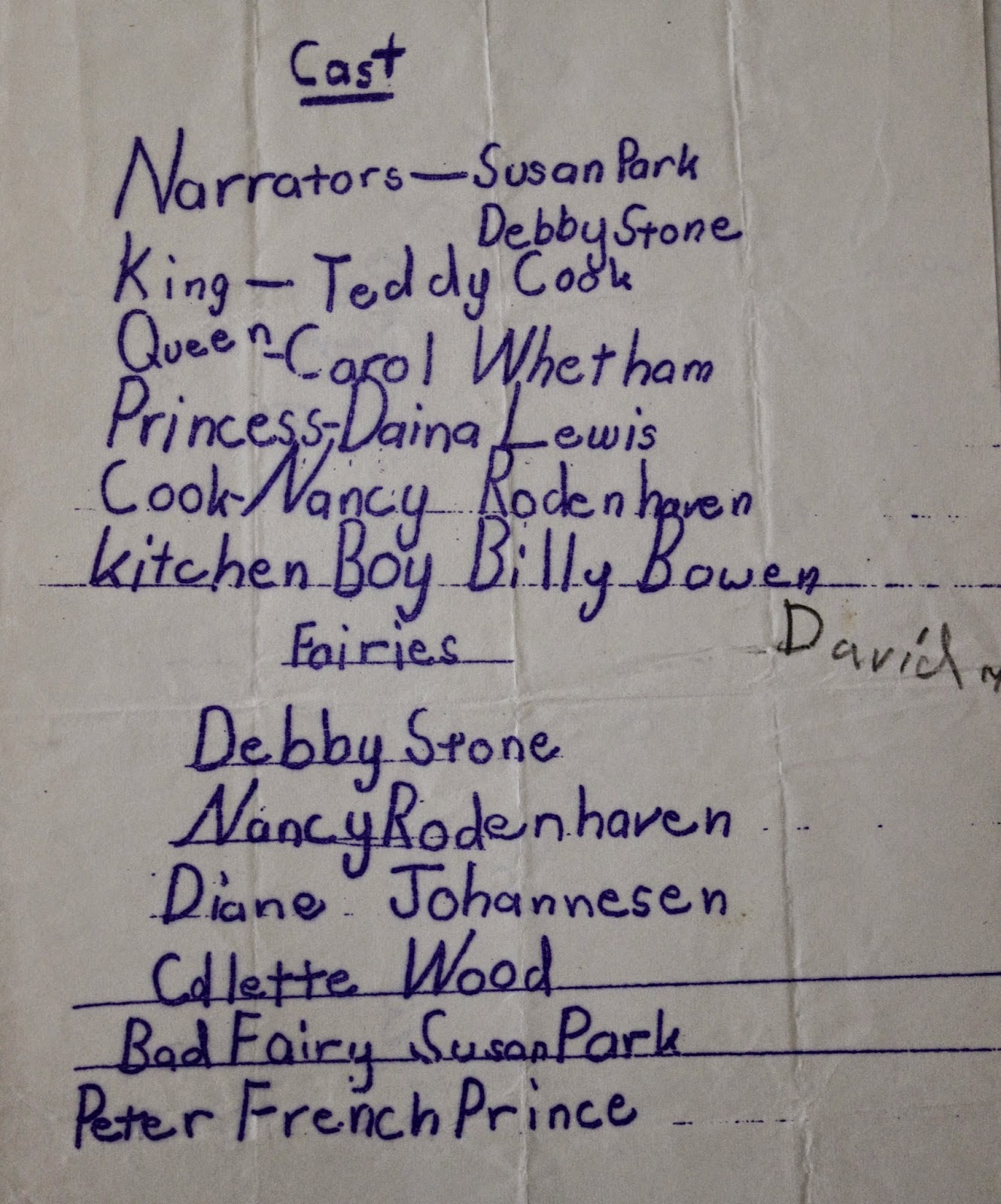 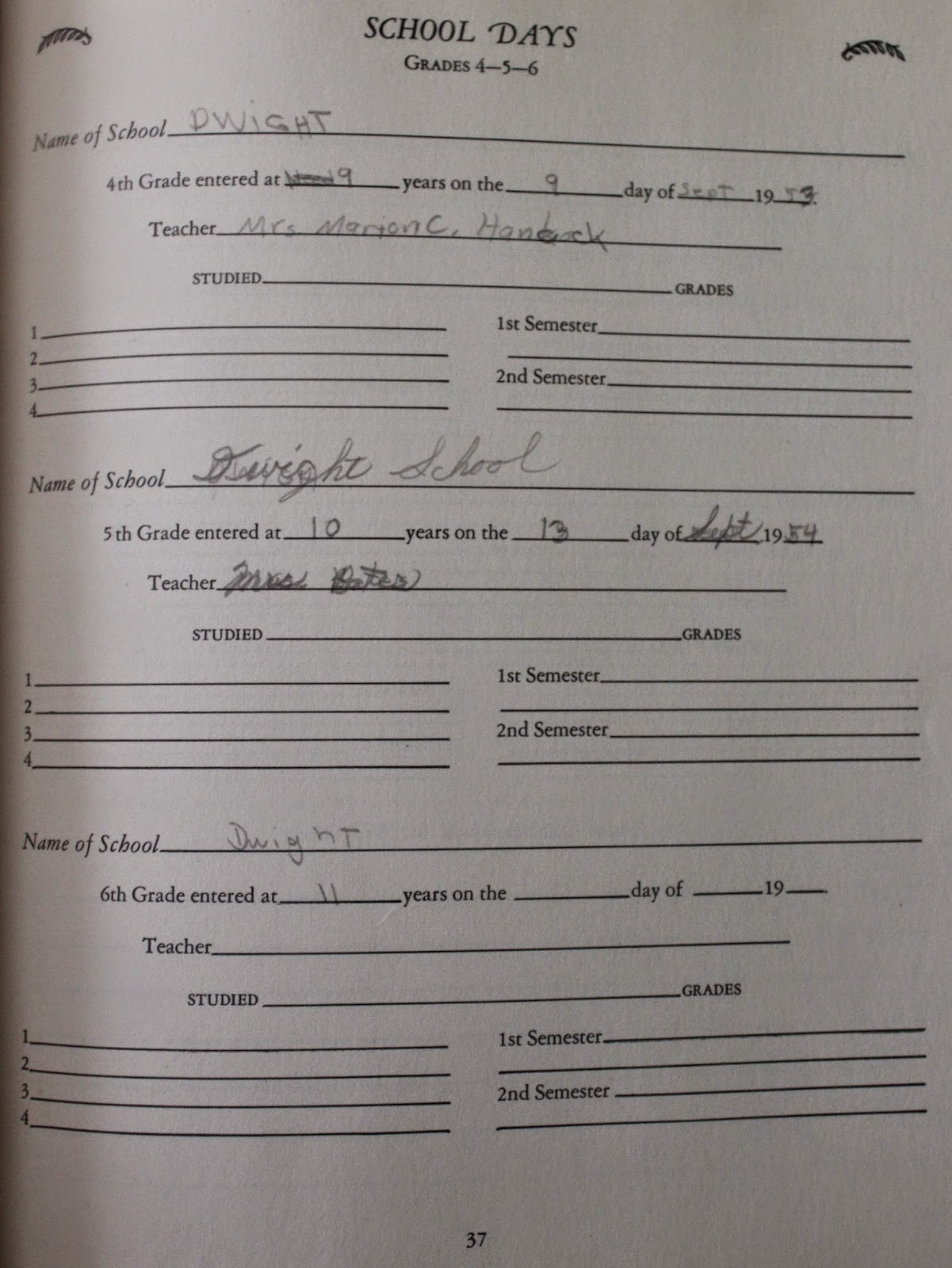 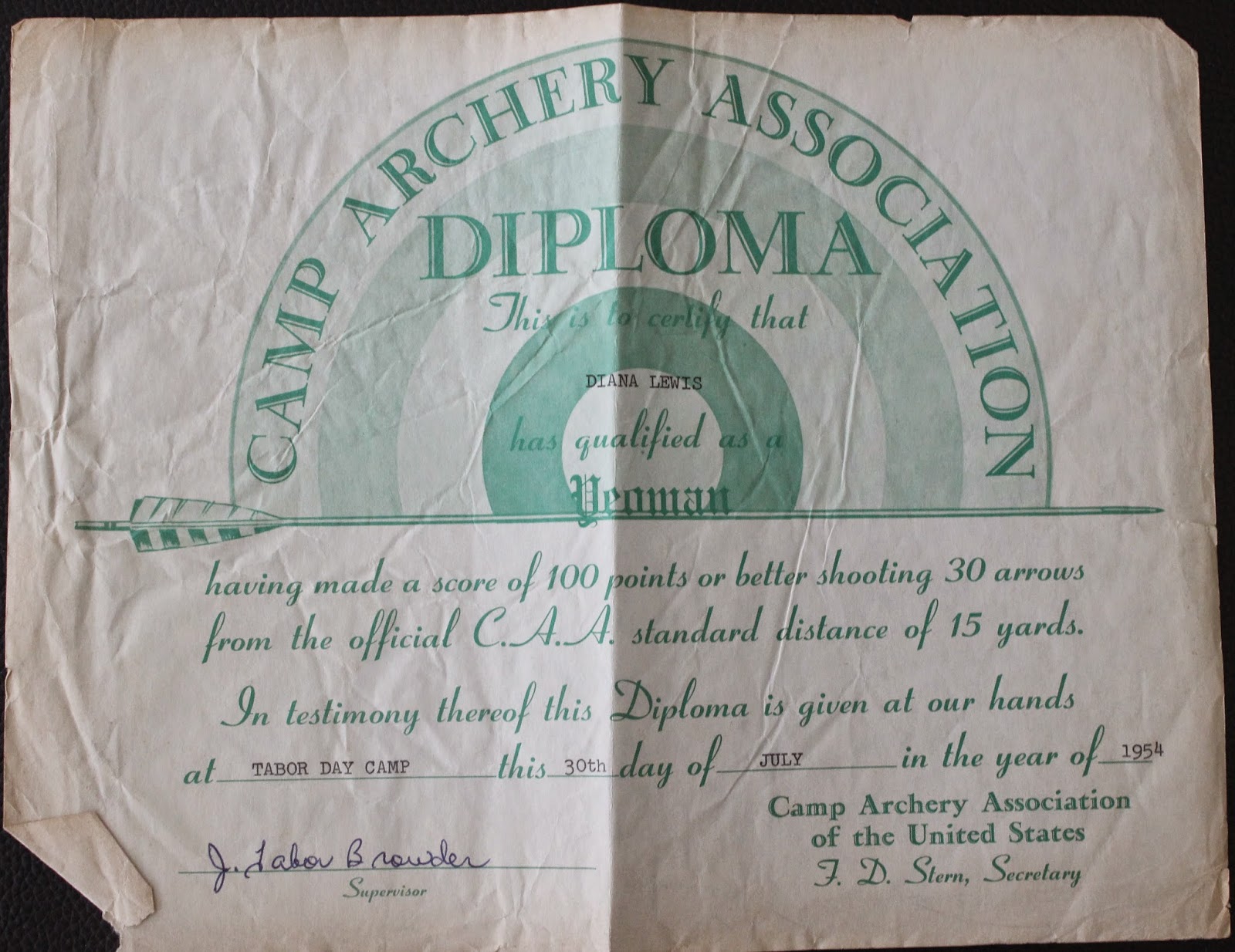 (Both Certificates found loose in book.) 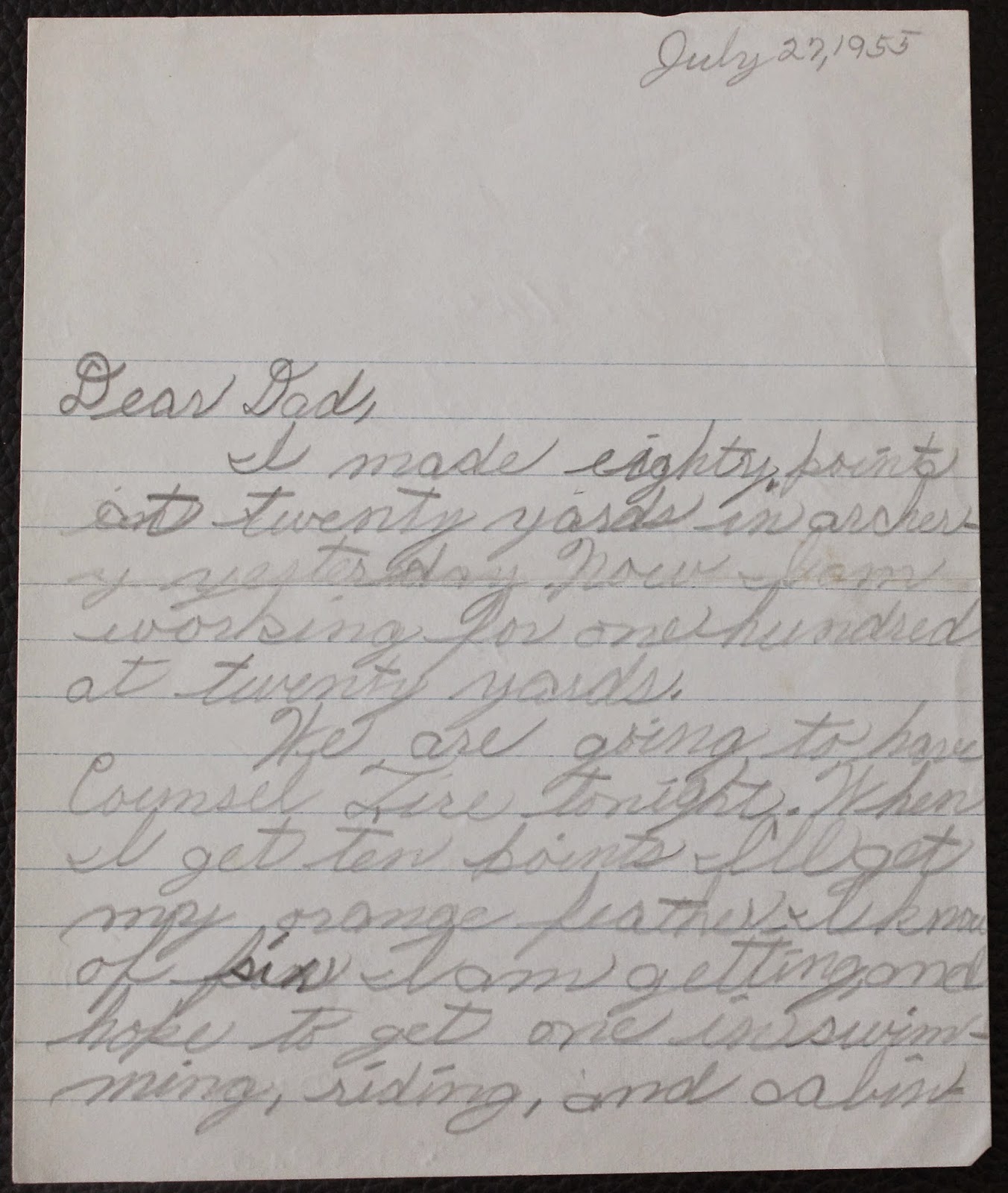 (Letter found written in pencil loose in the book.) 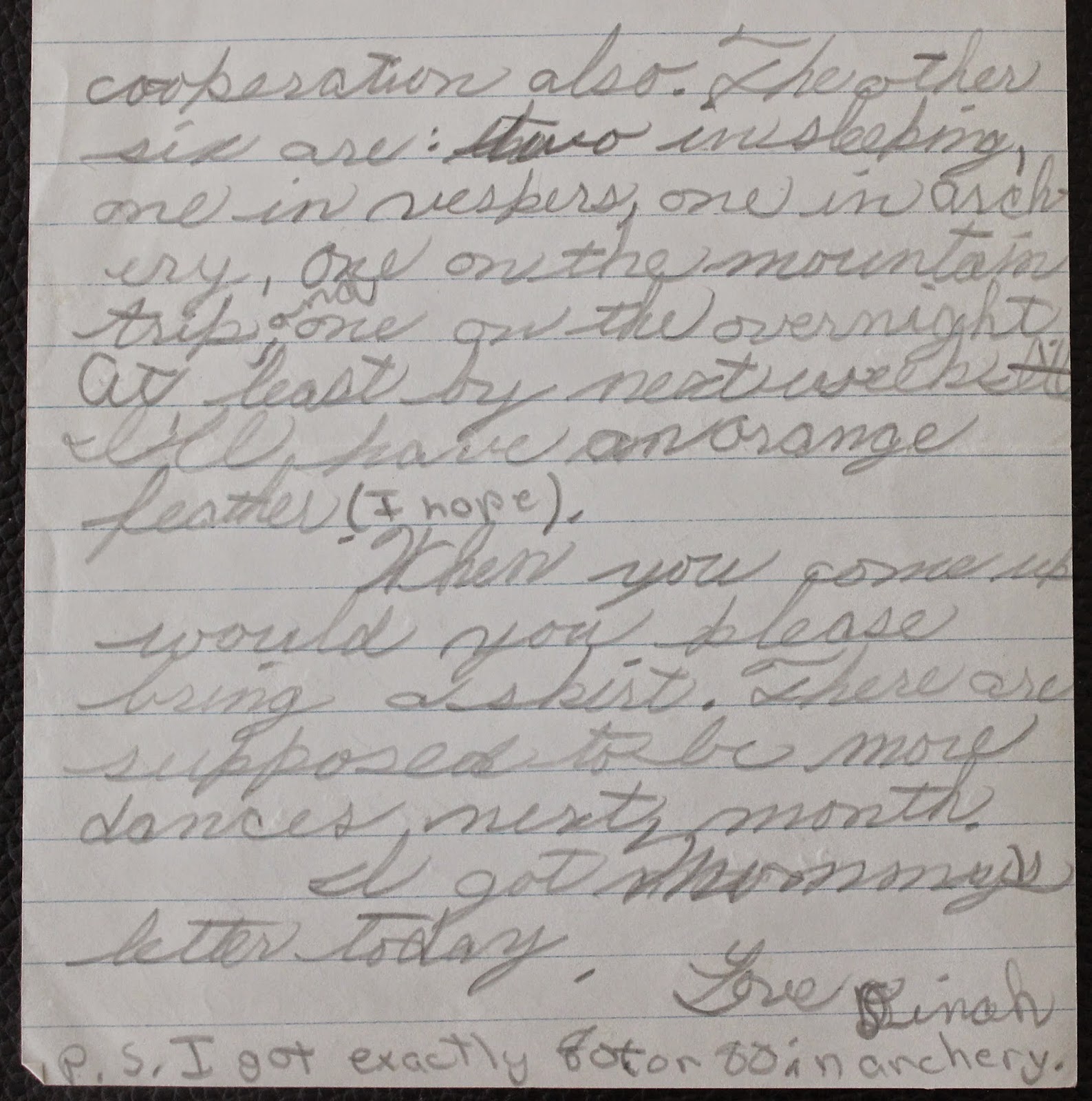 July 27, 1955
Dear Dad,
I made eighty points on twenty yards in archery yesterday. No I am working for one hundred at twenty yards.
We are going to have Counsel Fire tonight. When I get ten points I’ll get my orange feather. I know of six I am getting, and hope to get one in swimming, riding, and _______ cooperation also. The other six are: two in sleeping, one in vespers, one in archery, one on the mountain trip, and one on the overnight. At least by next week I’ll have an orange feather (I hope).
When you come up would you please bring a skirt. There are supposed to be more dances next month. I got mommy’s letter today.
Love Dianah
P. S. I got exactly 80+ on 80 in archery.

I don’t know about most of you when it comes to your baby books or those of your family members but these are precious treasures that can hold so much information. Don’t forget to include these in your research process, go back and give them a second or third look you might have missed something the first time you went through it. The rest of the pages in the book are blank, I will still post them for you to see no worries. But never fear as I’ve said before there are many loose items that came with the purchase of the journal and I will be posting more photos, newspaper clippings and some additional items including a marriage announcement for Diana Lewis.