Here are two more letters from Paul Moore addressed to his darling Elaine Cummings.  Showing concern that he has already been forgotten only to find out she still thinks and cares for him. Times are hard and letters take time to arrive, which leaves them both wondering if they are remembered while waiting for those special acknowledgment in letters like these. 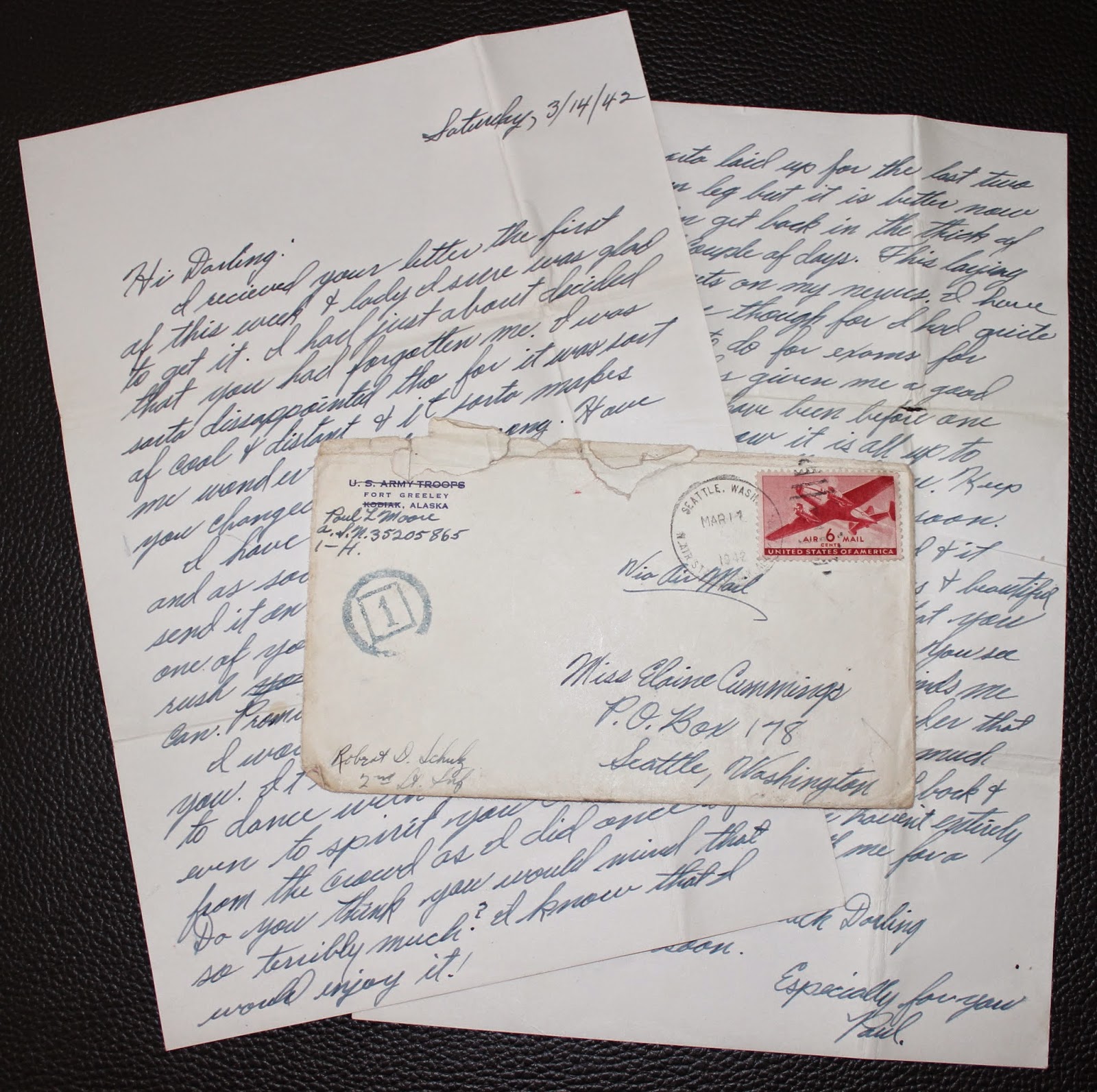 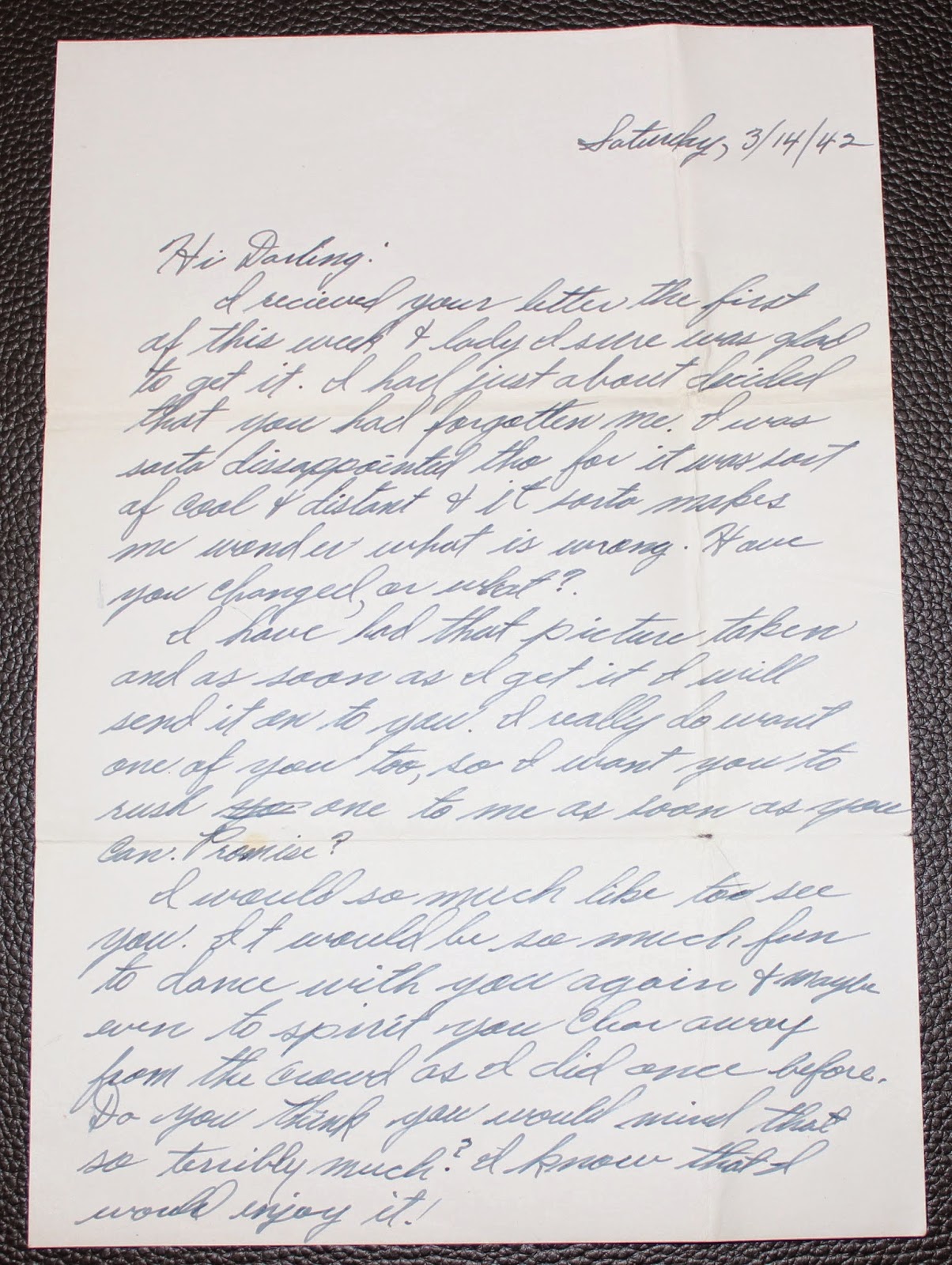 
Hi Darling:
I received your letter the first of this week & lady I sure was glad to get it. I had just about decided that you had forgotten me. I was sorta disappointed tho for it was sort of cool & distant & it sorta makes me wonder what is wrong. Have you changed or what?
I have had that picture taken and as soon as I get it I will send it on to you. I really do want one of you took so I want you to rush one to me as soon as you can. Promise?
I would so much like to see you. It would be so much fun to dance with you again & maybe even to sprit you clear away from the crowd as I did once before. Do you think you would mind that so terrible much? I know that I would enjoy it!
I have been sorta laid up for the last two days with a bum leg but it is better now and I think I can get back in the thick of things in the next couple of days. This laying around idle sorta gets on my nerves. I have put it to good use though for I had quite a bit of studying to do for exams for  officers School & it has given me a good chance to catch up. I have been before one examining board & now it is all up to me when I go before the last one. Keep hoping & maybe I can see you soon. I have been over most of the Island & it really is very pretty Rugged Mountains & beautiful parks & valley. Seems a shame that you can’t b e here to help me enjoy it. You see every time I see something that reminds me of you I begin to wish a little bit harder that you were here. I miss you so very much my dear. I guess I’ll keep on until I get back & then if my powers of persuasion haven’t exactly failed me I can keep you with me for a long time.
I miss you so very much Darling.
Write soon
Especially for you
Paul

NOTES: This was a two page letter with only one side used on each sheet. The letter was addressed to Miss Elaine Cummings, P.O. Box 178, Seattle, Washington mailed by Paul L Moore A.S.M. 35205865 1-H. (printed U.S. Army Toops Fort Greeley Kodiak, Alaska w/ U.S. Army Troops and Kodiak marked out) it was send March 17 1942 “Via Air Mail” and checked by 2nd Lt. Inf. Robert D. Schulz. 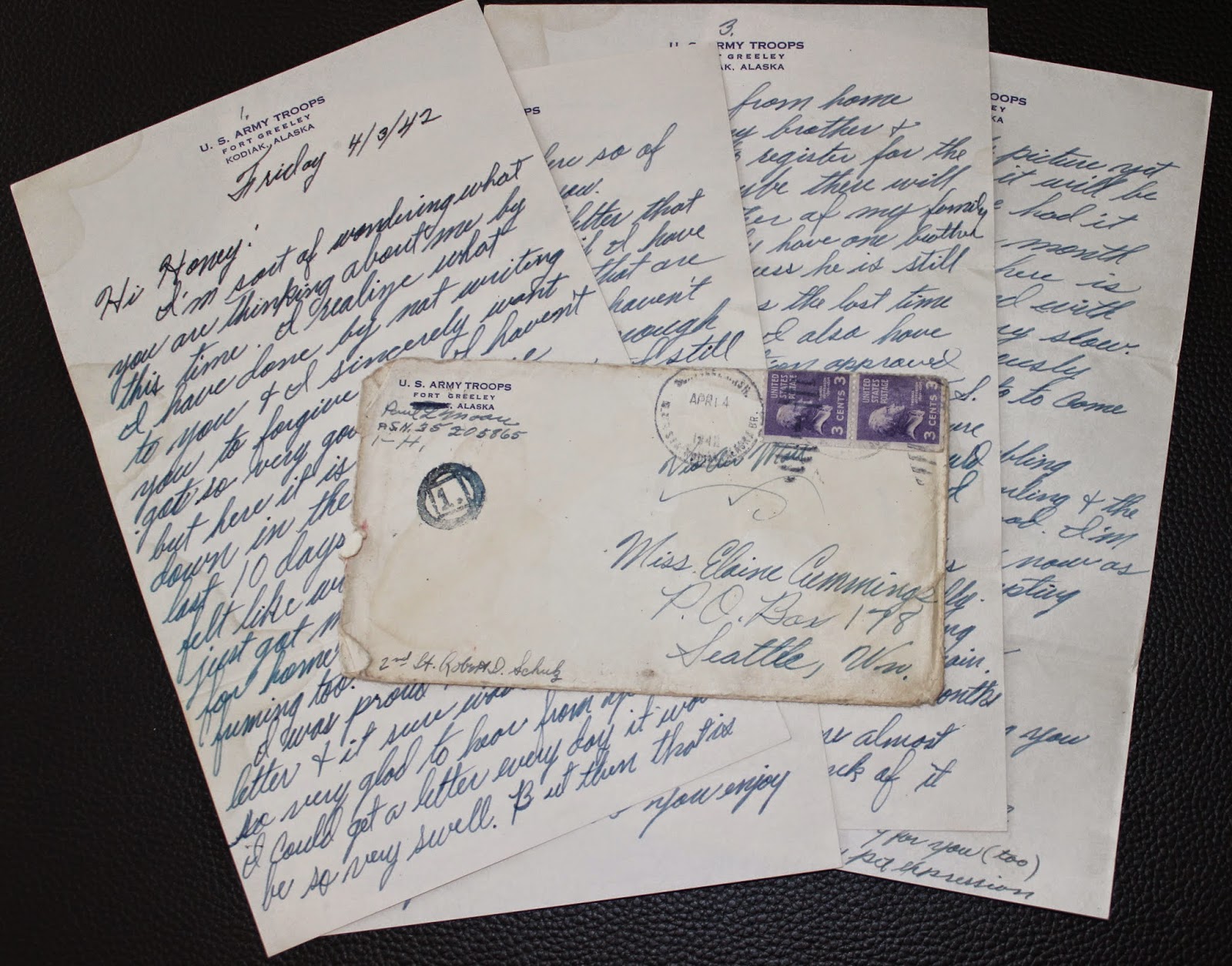 Hi Honey:
I’m sort of wondering what you are thinking about me by this time. I realize what I have done by not writing to you & I sincerely want you to forgive me. I haven’t got so very good an excuse but here it is. I have been down in the dumps for the last 10 days & just haven’t felt like writing to anyone. I just got my first letter started for home today & they’re probably fuming too.
I was proud to get your last letter & it sure was a help. I am so very glad to hear from you & if I could get a letter every day it would be so very swell. But then that is hardly possible up here so of course I can’t ask it of you.
You said in your last letter that your father had asked if I have seen any of the bears that are to be found here. I haven’t been lucky, unlucky enough to do so as yet I still have hopes. I have seen a couple of mounted specimens tho & they sure are big. I say. Could you use a bear skin. If I get the chance I mean to collect a couple. So you can tell him that he really should see them. Fishing season is just about here & I also plan on having a few good fish frys. Sound good? Maybe we can enjoy a few of those together sometime. Do you think so too or do you enjoy such things?
I had a letter from home Wednesday & my brother & Dad both had to register for the draft. So maybe there will soon be another of my family in here too. I already have one brother in the Cir Corp & I guess he is still in the States or was the last time I heard from him. I also have had my application approved & so my going to officer T.S. is just a matter of time. I sure hope it is soon tho for I sure would like to see you again. Every time I think of the fun we had dancing laughing & talking together it makes me want to see you so darned badly. We could have so much fun & loving if I was only back with you again. Just think it has been almost 3 months since I saw you. Seems almost like 3 years when I think of it tho.
I haven’t gotten the picture yet but I don’t think it will be long now. I have it ordered for almost a month but the Photo shop here is just about swamped with orders so they are very slow. I have been sorta anxiously waiting for your photo to come around too.
I must quit this rambling around & say Good nite Darling & the Ohio deal still stands good. I’m as badly gone over you now as I ever was. Still in an accepting mood dearest?
Write soon an again
I’ll be loving you
Paul (and written sig.)
I sure could use those
Kisses, too.
What do you mean?
Especially for you (too)
That’s my pet expression

NOTES: There were a total of four pages and all hand written on the same letter heading as noted above. The envelope was hand written addressed to: Miss Elaine Cummings, P.O. Box 178, Seattle, WN.
In the return address is: U.S. Army Troops Fort Greeley, the city is scratched out, Alaska, Paul L Moore, A.S.N. 35205865 1-H. The letter was post marked April 14, 1942 out of Kodiak, Alaska sent Via Air Mail. The letter was checked by 2nd Lt. Robert D. Schulz.