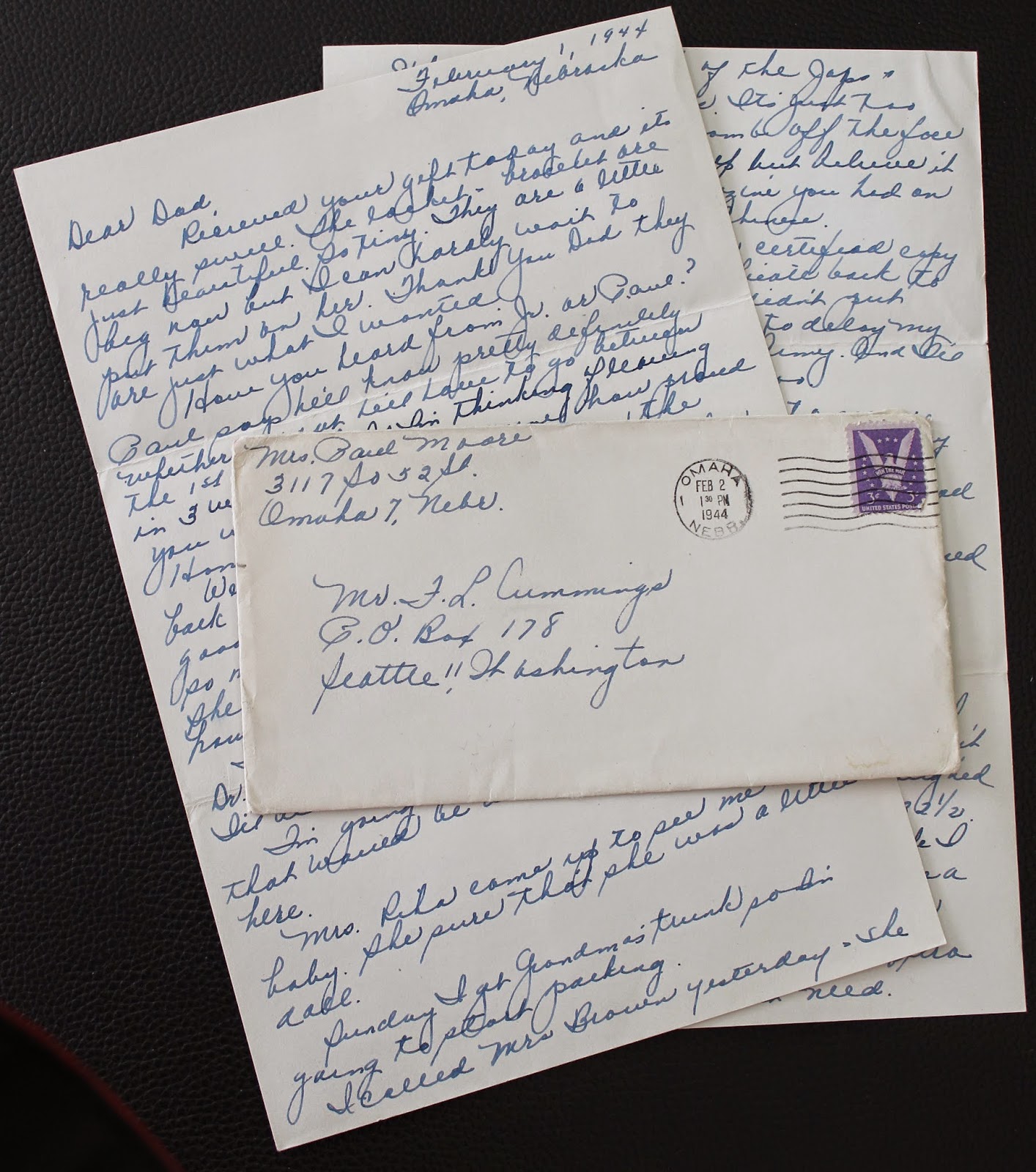 February 1, 1944
Omaha, Nebraska
Dear Dad,
Received you gift today and its really swell. The locket & bracelet are just beautiful, so tiny. They are a little big now but I can hardly wait to put them on her. Thank you Dad they are just what I wanted.
Have you heard from Dr. or Paul? Paul says he’ll know pretty defiantly whether or not he'll have to go between the 1st or 15th so I’m thinking of leaving in 3 weeks. I can imagine how proud you were seeing Jr. name on the Honor Roll. I’m proud too.
Well I just fed the baby and have her back to sleep. I hope, she’s really awfully good tho, and she’s so cute. She’s growing so much and just looks at everything she can focus her eyes. They are turning brown too.
I’m feeling swell and have to call the Dr. to let him know how I am. Then Sun. I’ll be able to go out.
I’m going over to Uncle Ch as decided that would be better than having them here.
Mrs. Rita came up to see me & the baby she sure that she was a little doll.
Sunday I got grandmas trunk so I’m going to start packing. I called Mrs. Brown yesterday, she wants me over for dinner before I go, so I’m going to be pretty busy seeing everyone and preparing to leave. If Paul must go I think I’ll leave anyway & go to W.Va. I haven’t made any arrangements with Aunt Marg & she doesn’t want anything but somehow I feel I’d like to give her something. ????? I’ll need all I can get now.
I ?????? to Jr tonite and I had a letter from Joyce telling me about the make up ??? Guess she’s very pleased & she thinks you have very good taste, so do I.
I haven’t said anything to Grandma all tho from all I’ve heard she really made a fuss over Aunt Mar notifying everyone & was quite insulting. I’ll be glad to get away from all the fracas for its quite nerve wracking.
The baby is really fussing but I’m letting her cry for if I spoil her I’ll really be tough. She’s just mad not hungry. It gives her exercise sure wish you could see her.
Dad I wish you good luck on the house and I’ve been thinking if Paul leaves I’ll go to W.Va. then maybe by the time of your vacation, you’ll have things settled. You can come get me & help me take care of her on the train. Does that sound ok?
What do you think of the Japs & their terrible atrocious. It’s just too horrible I hope we bomb off the face of the earth. I can’t help but believe it for I read that magazine you had on their treatment of the Chinese.
I have to take the certified copy of Carol Ann’s birth certificate back to the City hall for they didn’t put down her name. Anything to delay me getting it sent in to the Army. And I’ll need that extra money too.
Boy I’ll sure be glad to see a change of environment I think they are rather tired of me too. I guess I can hardly blame them for I’ve stayed longer than I ever should have. But as John says I really have learned a lesson sometimes I think my lessons will never end.
Well Dad I should try to get some sleep & I haven’t taken my exercises I have to keep them up if expect to get my figure back. I don’t weigh what I did in fact I weighed myself today, I weigh about 132 ½. I’ve lost my big behind, I hope I can keep it down.  But I have a tummy to lose too. Really feels good tho no to have that extra weight I really didn’t need.
Well I’m gonna close and will write again Thurs.
Thanks a million again Dad for the gift. They are perfect. 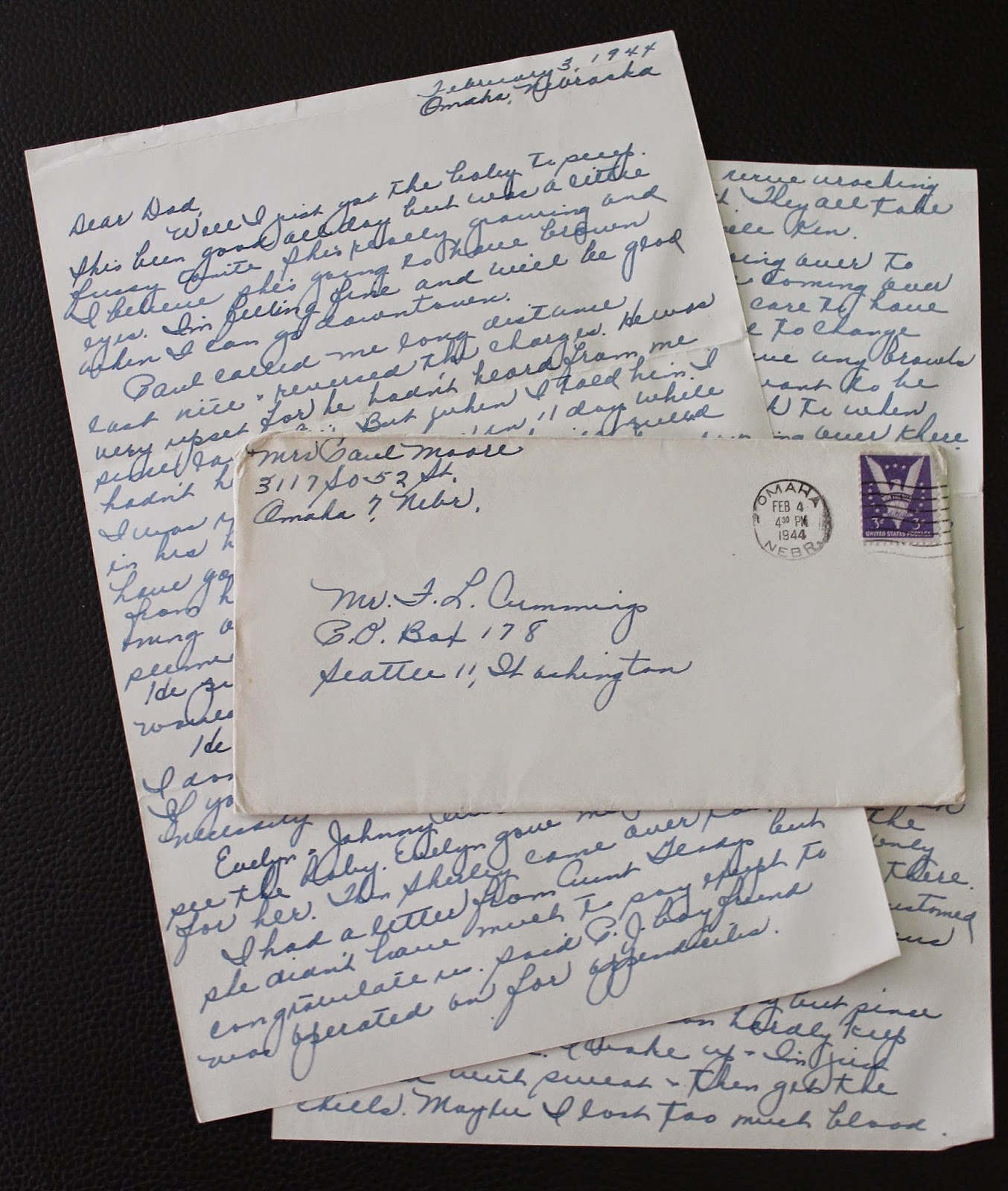 February 3, 1944
Omaha, Nebraska
Dear Dad,
Well I just put the baby to sleep. She’s been good all day but was a little fussy tonite she’s really growing and I believe she’ going to have brown eyes. I’m feeling fine and will be glad when I can go downtown.
Paul called me long distance last nite and reversed the charges. He was very upset for he hadn’t heard from me since last Fri. But when I told him I hadn’t heard from him in 11 days while I was in the hospital he kinda pulled in his horns. Then to top it off three days have gone by this week & I haven’t heard from him. He told me to keep planning on coming to see him???? he seemed worried he wouldn’t be there. He put a deposit on a house so he would have a place for us to stay.
He hasn’t written to Aunt Marg yet and I don’t know what I’ll do if he doesn’t. If you write to him try to explain the necessity. Will you?
Evelyn & Johnny were over yesterday to see the baby. Evelyn gave me a dollar for her. Then Shirley came over too.
I had a letter from Aunt Gladys but she didn’t have much to say except to congratulate us, said C.J. boyfriend was operated on for appendicitis.
Then I also got a letter back from the Bureau of Internal Revenue and Dad they don’t have a record of my seasonal payment on file. I wrote them all the details about it buy they can’t seem to find it. I don’t know what I’ll do if I have to pay it again. You know I sent a money order but like a fool I didn’t keep the stub. Like I say my lessons will never cease, seems like I have more thinks to worry about I should be getting my next check this week. I’ll have $100.00 but that won’t last long after I pay for the telephone call, the telegrams & any my train ticked I’ll also have an express bill too when I send the trunk.
Haven’t heard from Junior for a while but suppose he is busy. Grandma called today saying she had a letter from you. By the way don’t you think you’ll be able to come see me on your vacation no matter if I’m with Paul or in W. Va.? I’ll be planning on that for sure.
The baby was crying so Ken Jr. felt sorry for her so he goes in & pat her for a while & shacked her bed & finally quieted her for awhile. He feels pretty proud for he figured he had the right touch. ????? she’s at it again guess she’s really going to bawl – he’s in there again. I’ll have him experienced I imagine her crying nerve racking when they aren’t used to it. The all take their hand at it except Uncle Ken.
Did I tell you I was going over to Uncle Chas Sunday. They were coming over here but dumb Mary doesn’t care to have Aunt Loretta here. So I had to change plans. I hope they don’t have any brawls till I leave for I don’t want to be implicated. It all dates back to when Beverly was up here & her going over there. Aunt Loretta said something to me that I don’t understand nor take the way Aunt Marg said it was intended. If I had I never would have told her but I just told her what Aunt Loretta said about Bev causing so much trouble & saying thinks about Betty which weren’t true. Things are too confusing & ??? to me but I don’t want Aunt Marg to get me in bad with them.
I can hear Kenneth giving Bob heck for stomping up the stairs while the baby is asleep. The men are the only two who show any consideration there. The rest figure she should get accustomed to noise. It make me awfully nervous but there’s nothing I can do.
You know its sure funny but since I’ve had the baby I can hardly keep warm at nite. I woke up & I’m just soaked with sweat & then get the chills. Maybe I lost too much blood.
Well Dad I’m gonna close fro I’ll have to get some sleep for I never know how long the baby will keep me awake. And after I feed her at 9 in the morning I’m up for the day regardless. And I have several things to do.
Lots of Love
Elaine
Write soon.