This is the first one that I’m sharing that has a ghost dog mentioned, so still fitting with the season I felt that I must share. This one was found just like the other Halloween related articles that I’ve been sharing this month. This one appeared in the Plain Dealer out of Cleveland, Ohio in March of 1911. 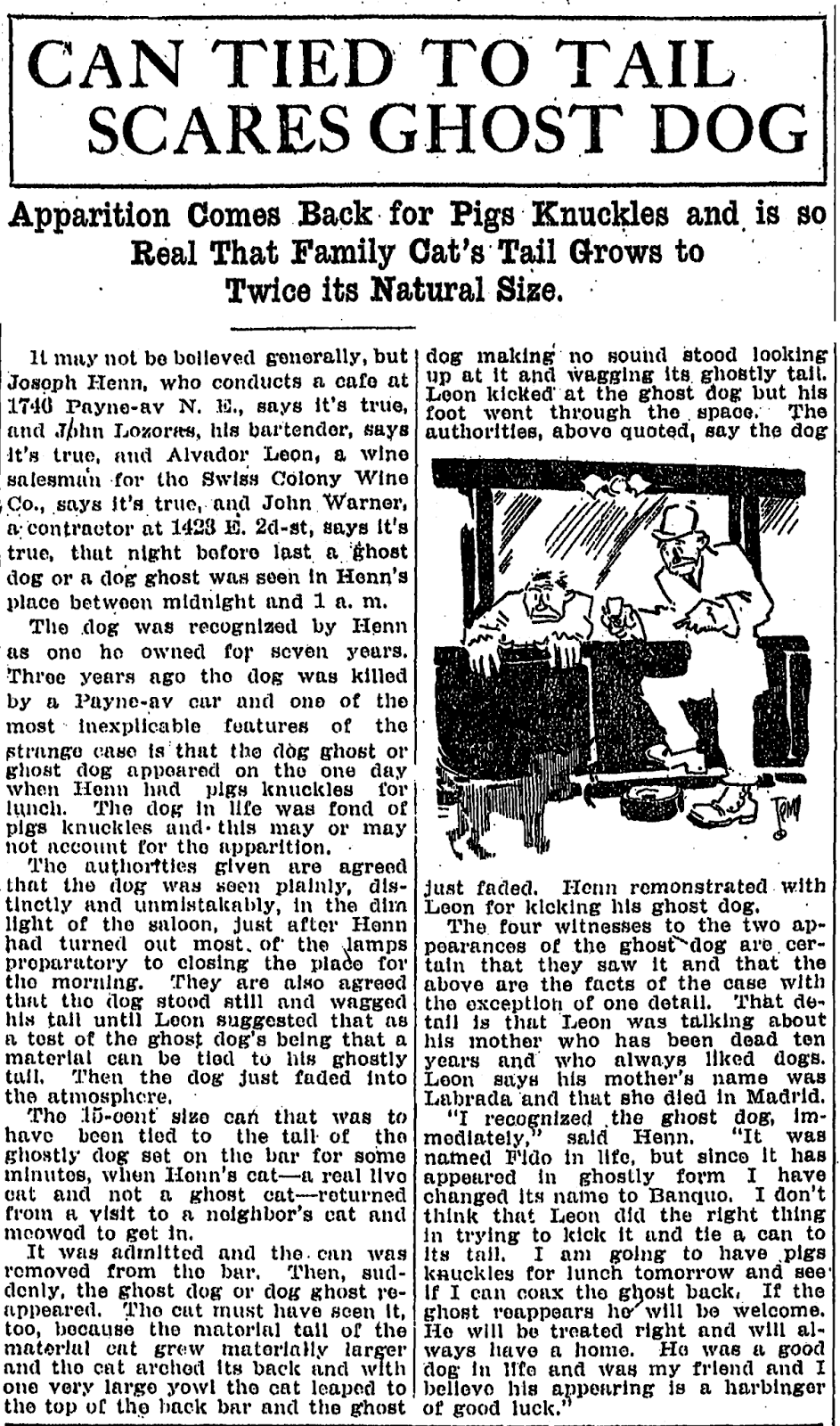 CAN TIED TO TAIL SCARES GHOST DOG
Apparition Comes Back for Pigs Knuckles and is
so Real That Family Cat’s Tail Grows to
Twice its Natural Size.
It may not be believed generally, but Joseph Henn, who conducts a café at 1746 Payne-ave N.E., says it’s true, and Alvador Leon, a wine salesman for the Swiss Colony Wine Co., says it’s true and John Warner a contractor at 1423 E. 2d-st, says it’s true, that night before last a ghost dog or a dog ghost was seen in Henn’s place between midnight and 1 a.m.
The dog was recognized by Henn as one he owned for seven years. Three years ago the dog was killed by a Payne-av car and one of the most inexplicable features of the strange case is that the dog ghost or ghost dog appeared on the one day when Henn had pigs knuckles for lunch. The dog in life was fond of pigs knuckles and this may or may not account for the apparitions.
The authorities given are agreed that the dog was seen plainly, distinctly and unmistakably, in the dim light of the saloon, just after Henn had turned out most of the lamps preparatory to closing the place for the morning. They are also agreed that the dog stood still and wagged his tail until Leon suggested that as a tost of the ghost dog’s being that a material can be tied to his ghostly tail. Then the dog just faded into the atmosphere.
The 15-cent size can that was to have been tied to the tail of the ghostly dog set on the bar for some minutes, when Henn’s cat – a real live cat and not a ghost cat – returned form a visit to a neighbor’s cat and meowed to get in.
It was admitted and the can was removed for the bar. Then, suddenly, the ghost dog or dog ghost reappeared. The cat must have seen it, too, because the material t tail of the material cat grew materially larger and the cat arched its back and when one very large yowl the cat leaped to the top of the back bar and the ghost dog making no sound stood looking up at it and wagging its ghostly tail. Leon kicked at the ghost dog but his foot went through the space. The authorities, above quoted, say the dog just faded. Henn remonstrated with Leon for kicking his ghost dog.
The four witnesses to the two appearances of the ghost dog are certain that they saw it and that the above are the facts of the case with the exception of one detail. That detail is that Leon was talking about his mother who has been dead ten years and who always liked dogs. Leon says his mother’s name was Labrada and that she died in Madrid.
“I recognized the ghost dog, immediately,” said Henn. “It was named Fido in life, but since it has appeared in ghostly form I have changed its name to Banquo. I don’t think that Leon did the right thing trying to kick it and tie a can to its tail. I am going to have pigs knuckles for lunch tomorrow and see if I can coax the ghost back. If the ghost reappears he will be welcome. He will be treated right and will always have a home. He was a good dog in life and was my friend and I believe his appearing is a harbinger of good luck.”