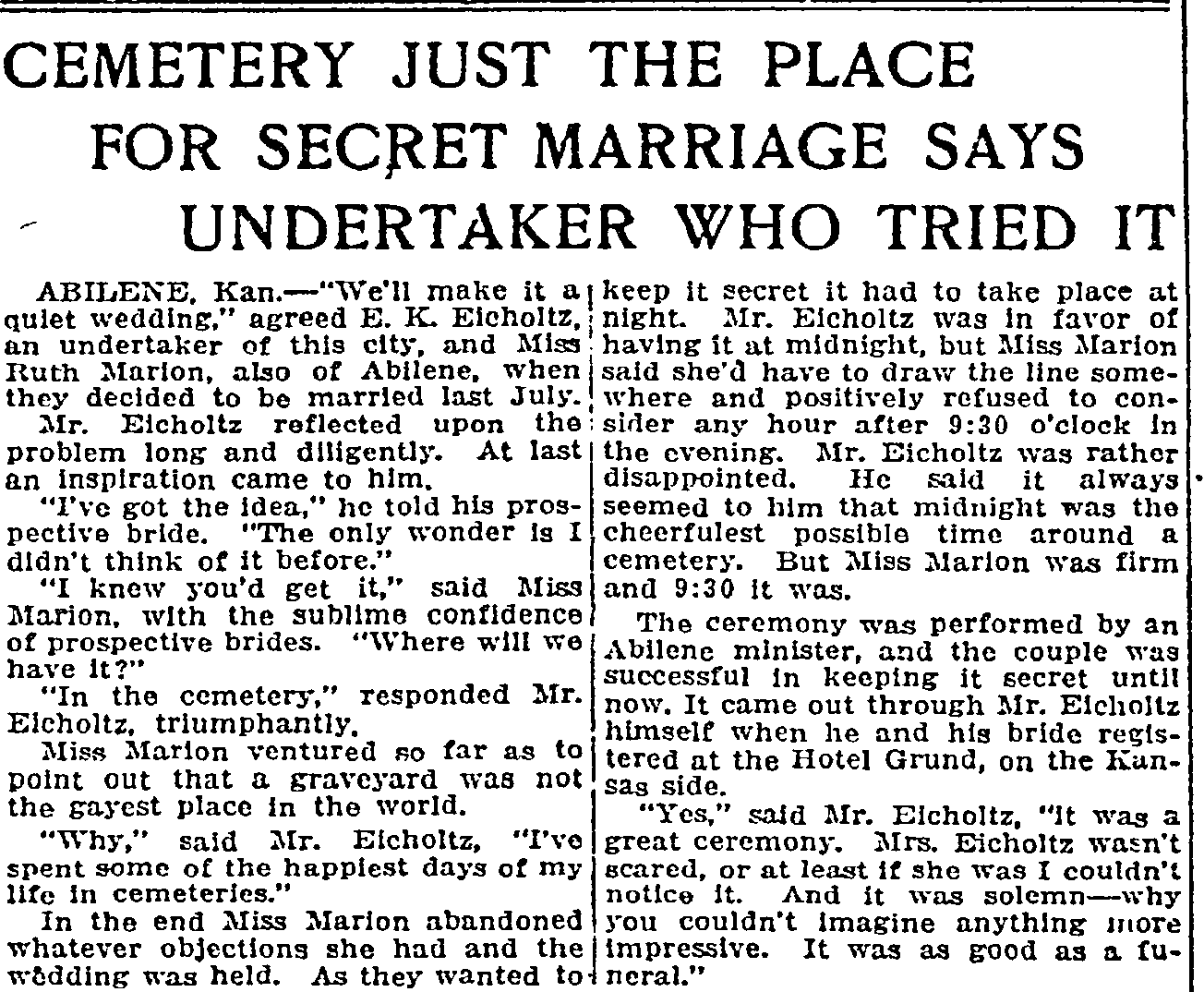 Published November 1916 in the Idaho Statesman out of Bois, ID

ABILENE, Kan. – “We’ll make it a quiet wedding,” agreed E.K. Elcholtz, an undertaker of this city, and Miss Ruth Marion, also of Abilene, when they decided to married last July.
Mr. Elcholtz reflected upon the problem long a diligently. At last an inspiration came to him.
“I’ve got the idea,” he told his prospective bride. “The only wonder is I didn’t think of it before.”
“I knew you’d get it,” said Miss Marion, with the sublime confidence of prospective brides. “Where will we have it?”
“In the cemetery,” responded Mr. Elcholtz, triumphantly.
Miss Marion ventured so far as to point out that a graveyard was not the gayest place in the world.
“Why,” said Mr. Elcholtz, “I’ve spent some of the happiest days of my life in cemeteries.”
In the end Miss Marion abandoned whatever objections she had and the wedding was held. As they wanted to keep it secret it had to take place at night. Mr. Elcholtz was in favor of having it at midnight, but Miss Marion said she’d have to draw the line somewhere and positively refused to consider any hour after 9:30 o’clock in the evening. Mr. Elcholtz was rather disappointed. He said it always seem to him that midnight was the cheerfulest possible time around a cemetery. But Miss Marion was firm and 9:30 it was.
The ceremony was performed by an Abilene minister, and the couple was successful in keeping it secret until now. It came out through Mr. Elcholtz himself when he and his bride registered at the Hotel Grund, on the Kansas side.


“Yes,” said Mr. Elcholtz, “It was a great ceremony. Mrs. Elcholtz wasn’t scared, or at least if she was I couldn’t notice it. And it was solemn – why you couldn’t imagine anything more impressive. It was as good as a funeral.”
Posted by Angie at 10:26 AM