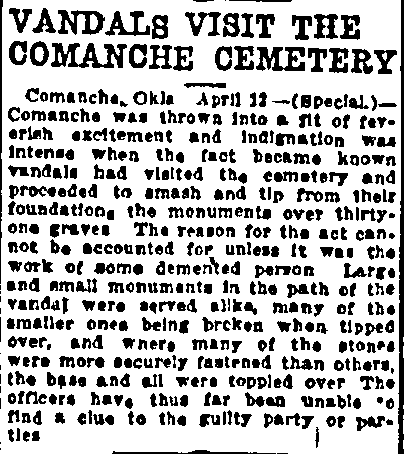 Published in April 1913 in the Daily Oklahoma out of Oklahoma City, OK


Comanche, Okla, April 13 – (Special.) – Comanche was thrown into a fit of feverish excitement and indignation was intense when the fact became known vandals had visited the cemetery and proceeded to smash and tip from their foundations the monuments over thirty-one graves. The reason for the act cannot be accounted for unless it was the work of some demented person. Large and small monument in the path of the vandal were served alike, many of the smaller ones being broken when tipped over, and where many of the stones were more securely fastened than others, the base and all were toppled over. The officers have thus far been unable to find a clue to the guilty party or parties.
Posted by Angie at 9:05 AM