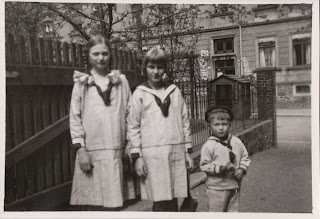 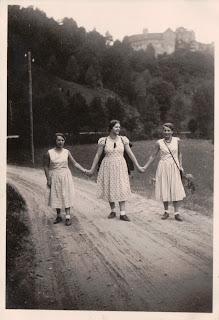 I received a wonderful surprise over Spring break and couldn’t wait to share it.  I would say many of us are familiar with FaceBook and even have an account, but then I remembered my own husband doesn’t. The thought of having to take time to communicate with everyone and read the ongoing lines of political drama, personal drama and game advertisement isn’t appealing to many. But in this case this particular FaceBook page paid off.

You can find genealogy, county and family history pages; I joined some pages that I have a family research connection to. It was on one of these pages I posted a scanned photograph of one page from our family bible and a photograph of my great grandmother posing with three other ladies and a small girl. I knew the names of those in the picture and simple just wanted to share something I had. Yes I like fishing sometimes, that fishing trip paid off. I received a reply to that posting from a nice lady who basically wanted to know who I was and how I had a photograph of her mother and grandmother. I replied with my answer as to who I was, how I obtained the photograph and my relationship to those in the photograph. She couldn’t believe it and neither could I, she was my mom’s cousin, we continued sending messages back a forth for a couple hours. She shared memories she had playing with my mom on my great-grandparents farm. I couldn’t wait to tell my mom and she couldn’t wait to get in touch with her and reconnect. It turns out that they hadn’t seen or spoken to each other in over 50 years and now they are sharing old memories and making new ones. Guess what I’m included and now have additional family members to connect with and learn more about my family, and their memories of my ancestors. We have all exchanged photographs; my mom and my great cousin are now looking forward to seeing each other face to face again. Oh yes, you best believe I will be there also. 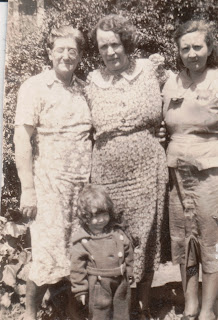 Who knew FaceBook would play such a roll in our genealogy research.  If you haven’t look into adding FaceBook to your research toolbox I recommend you give it a try. Who knows you might receive a message similar to mine.
Posted by Angie at 8:09 AM No comments:

Published on the 1st of May in 1904 in the Philadelphia Inquires out of Philadelphia, PA
NEWS OF INTEREST TO THE VETERANS
CEMETERY ASSIGNMENTS FOR LOCAL POSTS ON MEMORIAL DAY ARE ANNOUNCED
GENERAL OSTERHAUS TO BE GIVEN RECERTION BY THE DEPARTMENT COMMANDER
The commanders of the Philadelphia Grand Army posts announce the following assignments to cemeteries for Memorial Day: George G. Meade Post, No. 1, is assigned to North, South and Central Laurel Hill; Post 2 will hold services at Monument Cemetery. General U. S. Grant Post, No. 5, will visit All Saints’, the Philadelphia side of Mount Moriah, and St. James’, the Old Swedes, Burial Ground at Sixty-ninth and Woodland avenue. Ellis Post, No. 6, will decorate the graves of comrades buried in the cemeteries of Germantown and the Chelten Hills. Camp No. 9, of the Sons of Veterans, will assist them at Holy Sepulchre and Ivy Hill Cemeteries. Captain Walter S. Newhall Post, No. 8, will visit the Palmer and Hanover Cemeteries, and decorate the W. S. Newhall Monument. Glenwood Cemetery will be visited by General E. D. Baker Post, No. 8.
Lieutenant John T. Greble Post, No. 10, is assigned to St. Paul’s and Lafayette Cemeteries. Hetty A. Jones Post, No. 12, of Roxborough, will visit the Leverington, St. Timothy’s and the Presbyterian, Lutheran and also the Hetty Jones monument. Colonel Ulric Dahlgren Post, No. 14, is assigned to Greenmount, Laurel Hill, St. Michael’s and New Cathedral Cemeteries, and the grave of Colonel Dahlgren. General G. K. Warren Post, No. 15, Manayunk, will decorate the graves of comrades at the German Reformed, St. David’s, St. John’s, German Catholic and the Presbyterian Cemetery, at Manayunk. Colonel W. L. Curry Post, No. 18, will observe the day at the south side of Fernwood Cemetery, and at Colonel W. L. Curry’s grave; South Laurel Hill. The services at the Od Fellows’ Cemetery will be in charge of Colonel Fred Taylor Post, No. 19. Courtland Saunders Post, No. 21, is assigned to Woodland and Cathedral, the Quaker Cemetery, at Darby, and the Baptist, at Blockley.
The Hebrew cemetery at Eleventh and Federal streets will be visited by Admiral Dupont Post, No. 24. John W Jackson Post, No. 27, will attend services at Merion Cemetery. The Cavalry Post, No. 35, is assigned to West Laurel Hill Cemetery and the McClellan monument. Colonel Gus W. Town Post, No. 46, will decorate graves at Ronaldson, Philanthropic, St. Peter’s, at Third and Pine streets, and the Old Pine Street Church burial grounds. Captain Philp R. Schuyler Post, No. 51, is assigned to Franklin, St. Ann’s, Belleview, St. Peter’s and Holy Redeemer Cemeteries. General Phil Kearney Post, NO. 55, will decorate graves at St. Joachim’s, Cedar Hill. North Cedar Hill, Cheltenham, Oxford Church, Pennypack, Bridesburg, Magnolia and Bustieton Cemeteries. The graves of comrade in the west side of Mt. Moriah and also at Graceland Cemetery will be decorated by Colonel John W. Moore Post, No. 56. General D. R. Birney Post, No. 63, will visit Oakland and Knights of Pythias Cemeteries, and also the grave of General D. B. Birney. General John F. Reynolds Post, No. 71 is assigned to Old Swedes, Union, Mutual and Whatron Street Cemeteries, and to the Reynolds monument. Post 77 will go to Olney. The graves of Union soldiers at Wilmot and Bethel Cemeteries will be decorated by Robert Bryan Post, No. 80. The observance of the day at American Mechanics’ Cemetery will be in charge of Anna M. Ross Post, No. 94. Olive Cemetery will be visited by Charles Summer Post, No. 103. Winfield Scott Post, No. 114, will visit Mt. Vernon and St. James the Less Cemeteries. General John A. Logan Post, No. 115, is assigned to the Baptist Cemetery at Broad street and Passyunk avenue, and also at Trinity Lutheran. General Hector Tyndale Post, No. 160, will decorate graves at Mt. Peace Cemetery and also the grave of General Tyndale at North Laurel Hill. Pennsylvania Reserves Post, No. 191, is assigned to Fifth and Arch streets, Fernwood, Christ Church Cemeteries, and also the tomb of Robert Morris. John A. Koltes Post, No. 228, will visit the German Lutheran Cemetery and grave of Colonel Koltes at Glenwood. General Robert Patterson Post, No. 273, is assigned to St. Mary’s and to the Philadelphia Cemeteries and to General Paterson’s grave at Laurel Hill. Lieutenant Edward W. Gay Post, No. 312, will visit Northwood, Milestown, Baptist and Methodist Cemeteries and the grave of Lieutenant Gay. Colonel James Ashworth Post, No. 334, of Frankford, will decorate graves at the Methodist, Presbyterian, Mt. Smai, Hedge Street, Holmesburg, All Saints’, Collegeville, German Hill and Torresdale Cemeteries, and also the grave of Colonel Ashworth at Cedar Hill, as well as Section 6 at that cemetery. The services at the National Cemetery at Germantown will be in charge of General T. C. Donovan Post, No. 363. Naval Post, No. 400, will visit the Mt. Moriah Naval Plot and St. Mary’s Fourth and Spruce streets.
Department Commander Walton and his staff will tender a reception to Major General Osterhaus, who is now visiting America for the first time since the Civil War, at the German Society Hall, Seventh and Spring Garden streets, Tuesday evening. All veterans are requested to attend the affair in Grand Army uniform.

Appeared in Grand Forks Daily Herald out of Grand Forks, North Dakota on April 16 1898
APRIL IN AMERICAN HISTORY
April is an eventful month in American history. Thirty-seven years ago, two days after the firing of the shot that initiated the bloody battles of our civil war. Fort Sumpter surrendered. Thirty-three years ago Abraham Lincoln, who exhausted every honorable means to avert that conflict, and whose statesmanship saved the republic, was assassinated. The fatal shot was fired on the night of April 14 and death ensued on the following day.

April witnessed both the beginning and the end of the war of the rebellion: Sumter was fired upon on April 12, 1861, and Lee surrendered to Grant April 9, 1865. The same is true of the revolutionary war; the battle of Lexington was fought on April 19, 1775, and the preliminary treaty of peace with Great Britain was ratified by congress on April 15, 1783. The Mexican war began in the same month, the first battle being fought on April 23, 1846.

Three momentous events in our earlier history have their dates in the month of April; the first congress met on April 6, George Washington was inaugurated president on April 30 of the same year and the navy department was organized on April 30, 1798. It was on the last day of April, 1803, that the treaty was made with France for our purchase of Louisiana.

The necrology of the month is too voluminous to be considered, but from the list of earth’s greatest who died in April may be singled out the name of Benjamin Franklin, philosopher, statesman, scientist, patriot and father of the printing craft.

As a natal month of historic events April has a fruitful record, and at the rate we are now making history the April of 1898 will contain many important additions. –Chicago Times Herald.
Posted by Angie at 10:44 AM No comments:

You never know what you might have missed while searching the web and reading all your messages that’s why I enjoy sharing some of these blogs. I’ve not listed them in any particular order just wanted so share some that caught my attention. Enjoy!


A Home in Missouri – “They Call My Name”
posted on March 14, 2016
posted by Denise Muhammad
http://ahomeinmissouri.blogspot.com

A Southern Sleuth – “In Your Easter Bonnet”
posted on March 29,2016
posted by Michelle Ganus Taggart
http://www.asouthernsleuth.com/